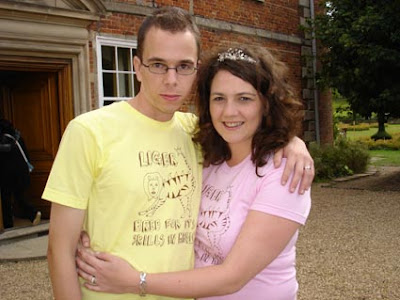 I don’t know much about music and realise I’m fairly herd-ish. Given I was born in 1977, and I don’t like change, I’m a relatively predictable blend of Britpop, Dad rock, occasional drunken punk, mellow acoustics, ’60s classics and songs from films I’ve stolen as my own. Mr Thatwoman is a born muso. Our colour coded CDs include a shelf, a mini rainbow, of thatwoman’s music where he’s hidden the small playlist which I turn to again and again.
In the interest of full disclosure I should probably admit that this music apartheid is mostly because when properly pissed I like ‘Magic FM’ and show tunes. I like gigs though, and this weekend we went to the Roundhouse in Camden to see Belle & Sebastian.
This felt like a tiny betrayal. We last saw the band at Spider-boy’s first festival where he wore love beads and a straw hat and earnestly asked his father the name of every song and whether the next one would be Can you feel it? or The Land of Make Believe (his two favourites). Alas those covers never came. It made an impression, though, and he still asks his daddy to put ‘boy with a strap’ on the iPod.
But we embraced the freedom and started the evening outside the venue, Mr Thatwoman searching out lager by the single, me resisting the urge to run home immediately, wipe off my make up and resume breastfeeding. A man came up to me. He was young, and studenty, and despite still being of my generation brought out a maternal sense in me. He was asking fans to share their thoughts on the band. Flattered though I was that he took pity on the girl who looked like she didn’t often attack the evening unencumbered by a changing bag, I declined, knowing I’d never be able to remember the names of the songs and would end up, on some vlog, humming something bouncy about graveyards or funny little frogs in some excruciating version of Name That Tune. No matter though, because they did play my favourite song, which is about coffee tasting of washing up.
As the laser lights swirled Stuart Murdoch and co admitted to being in nostalgic mood. On our first date-ish night out since Newborn’s arrival, who were we to argue with letting go for a night? We shared the sentiment (hence the cheeky can on the venue steps when we were predictably early). At the risk of a dreadful ‘teen spirit’ gag, certainly the whiff of just gone youth was in the air amongst the now mostly 30 something fan base.
We drank pints of beer, held hands and I spent half of every song sneaking cheeky peeks of my husband, in profile, singing along like the handsomest boy in the 6th form. The ticket buyer was a friend of mine from Uni. We agreed we should have spent more time dancing at gigs in those hallowed halls, and less time drinking red wine and playing scrabble.
SPD, it turns out, has its uses. I found my spiritual home on the edge of the throng jiggling from the waist up and half jumping using only my knees. The Mum’s pogo, I like to think. I suspect I looked a bit of an embarrassment. I’m thinking of asking London Underground’s ‘Baby On Board’ badge suppliers to make a sequel pin for Mums post birth which says ‘Doesn’t Get Out Much’. But oh I had fun.
Modern gigging is ace. If you can’t see the stage there’s always a fan three rows ahead with their i-Phone out and you get to see the lead singers in digital close up. The floor is less sticky and the ceiling doesn’t drip. And we were lucky, when we did get a buzz on the blackberry from our babysitter it was her happy status update about the rediscovered joy of a 6 month old snuggling on your chest.
Even though the singer’s seen the back of 40, the air has a youthful retrospective glow as if the whole gig was gagging to be instagrammed. The real cool kids still distance themselves from the throng of course, standing on balconies and in VIP bars. We saw you, the Camden coolsters, sipping spirits in the sky while us groundlings squealed along to a recorder solo. But as with fancy dress parties, so with live music I reckon – it may retain a certain credibility to stand in the corners looking stylish, but everyone enjoys the person who actually dressed up as The Exorcist, including Victorian nightie and plasma vomit. Long live the playful nerds and all who sail with her, shouting out the lyrics and putting two hands up because we’re so excited.
And then it ended. A short sweet encore, time for one of our number to baggsy the playlist and lights up. We ended with a cheeky final beer at home with Spider-boy’s left over coconut cake and a babysitter who was relatively unscathed. We were no longer feeling sinister, but still humming along.
I resisted writing this as I am suspicious of talking about music. And also suspicious of fun. As we lay in bed I said Mr Thatwoman should have spoken to the lad, the skinny student interviewing fans outside. ‘Nah’ he said, despite my protestations that he knows what the songs are called and has liked the band, like, forever, ‘It’s too easy to sound like a dick when you talk about music’. Night night.