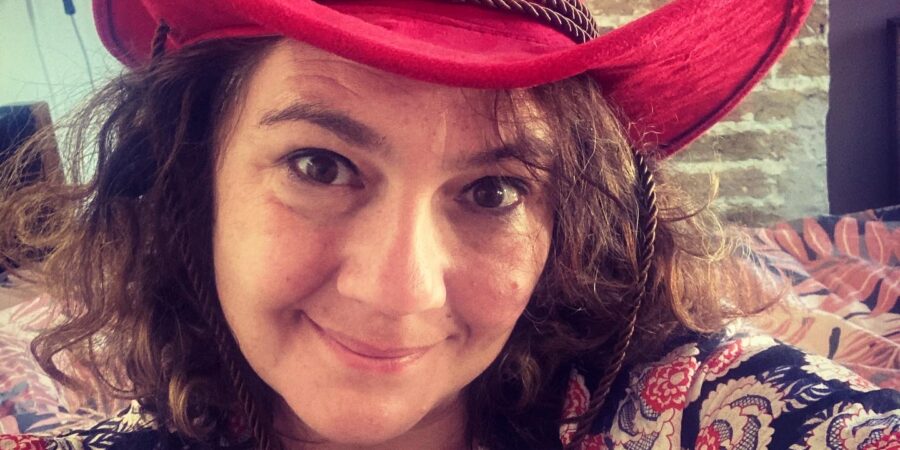 Confession time. I never thought anyone would buy my book, and I certainly didn’t realise I would get the opportunity to tell my story all around the world. Today is a strange, beautiful and amazing day. PMSL starts her journey in America. Look, you can buy here here at Barnes&Noble who I’ve only heard about in the movies, from Amazon.com or from independent stores like Greenlight.

As I can’t travel there I decided to celebrate with a bright red stetson. Turns out, I was kind of using a pantomime uniform, yes to express my excitement about how amazing and lucky I am that the book is travelling the world, but also to cover up or cap off a nervo. The delayed reaction maybe to the whole memoir experience thing. So the picture above, and below, isn’t the one I used on INSTA it is the more realistic one, the one with the nervous eyes.

I’ll be on loads of amazing podcasts, radio shows, and TV, talking about how and why I lost control of my continence, and why that drove me to write a book about it. I’m excited, thrilled, insanely grateful. As a show-off, and someone who has spent lockdown mourning the lack of new faces, new connections, new people, new ideas, so happy to have the privilege to talk to more people in the States and also here about PMSL. Especially as I’ve started to hear such lovely stories of the book being passed on from readers to new readers, spot references and reviews from people I’ve never met.

But also, just a tiny bit sad that this is a story that needed to be told, that it was my story, that I keep hearing that other people have had such a shitty time too, with their incontinence, their mental health, or any other condition, again and again. Because the chord PMSL strikes stands or falls on being relatable and somehow universal. And I’m beginning to find that sometimes that is really happening. It’s wild. But also upsetting. I don’t want people to have had a crap time. Because, by God there’s enough of it out there already.

There is a universal difficulty that so many of us can relate to in PMSL and stories around sudden incontinence. One we might even re-relate to so many times in our lives. The bit where your destiny and sense of yourself, the momentum you thought you were creating, is kicked off its path and shown to be a complacent lie. You in fact had no control at all.

Today in the UK this podcast came out – #AIMYU – from Huff Post with some amazing hosts. It is called ‘Am I Making You Uncomfortable’ and is a part of their fascinating series on women’s bodies, healthcare, taboo, and things which are embarrassing or uncomfortable to talk about. Here’s the background:

As I listened back to it this morning what struck me so hard was the interest and engagement from the hosts Rachel Moss and Brogan Driscoll and one question from the end:

‘Aren’t you pissed off that you have to tell this story?’

It caught me when she said it, but on listening back it made me cry. Along with thinking about the other women whose stories are shared there too.

That’s the trouble with being a warrior, a crusader, in a stigmatised landscape. You find yourself a loud and lone voice, having to break and crash your way through the difficult walls of taboo. And that sometimes leaves you with scrapes and bruises. Or a bit tearful and upset with people being kind and interested and the sort of flashes or waves of overwhelm that come with that.

You have to give away a lot for the seriousness of something so personal and uncomfortable and embarrassing to be heard. And you have to keep revisiting you all over again if you are telling an autobiographical story. But to do that you have to disengage such a tiny bit – but if you connect, and connect properly with other people, you forget to disengage for a second and BAM, you wind up winded.

2020 has been a tough old year, one which frequently makes me think I’d eat my own vomit before revisiting so much of it. But having a book out – even in lockdown – has also brought joy, forgiveness maybe (of the versions of me who didn’t feel they were good enough), and opportunities. I’ve been so honoured to hear so many stories. And also to see and feel and touch and catch the elusive moment that moved me in the Huff podcast – that moment of validation in other people. That moment where readers or listeners who have heard me talk about incontinence or PMSL and its themes and have said to me that the book connected, resonated, and somehow validated them too.

It was the same before the book even came out, the first time I fully (and I mean fully) bared all on The Naked Podcast.

I’ve been so lucky to speak so far to so many people – journalists, podcasters, authors, radio hosts – and introduce them to a weird world of adult accidents, incontinence pants, pads, puddles, ruined muffs and so much more. I can see sometimes I’ve tested their mettle, just as I’ve had to see if I am good enough (and compelling enough!) to get them interested in this story of grimness, shame, broken fannies and an everyday taboo.

I can’t fail because I know there might be so many people out there who might for once hear themselves. For once, see that their story isn’t a unique one of personal failure. That they haven’t failed with a broken body, been a failed birther, whatever. And more that they might, on hearing something that does sound like experience they can relate to – emotional, medical, visceral, psychological – feel able to do something about it, or at the very least feel heard by simply connecting the dots with a woman they’ve never met – who, lets face it, made a billion mistakes herself.

And it isn’t just people with bowel or bladder incontinence who need to be heard, in our wordl where we fear ill health so extremely. I have been honoured to hear from readers who have never had any incontinence who have felt so many areas of the story spoke to them and their health/mental health, their feelings around their own changed life narrative.

So when I speak to anyone about my book I feel I can’t fail because there is a chance, even if my voice is too fast, or I fluff a line or worse I cry in the recording or you can hear my voice cracking as I speak, that someone listening might feel empowered to get help. Might recognise something of their own experience in mine, and feel recognised because of that. Especially if they, like me, don’t find incontinence or any other difficult condition easy. Don’t glide along like Superwoman dealing with life change and disappointment and grind and upset and mess as if it is just another hallowed part of being a woman or a carer or a mother or a stiff upper-lipped, not making a fuss patient, or whatever.

A podcast I made last week with Essity had a similar effect – and I can see it is still being shared all over the place. That’s a funny feeling, like recording the PMSL audiobook, which catches me off guard if I linger on it too long – that other people are hearing my usually whispered, disguised as anecdote, or spoken too fast stories, right from my mouth.

But in the end it is good. And not just in the great femroar around continence. I know that PMSL, if people can get past the pissy bits, has had appeal to others. Anyone with any other life shaking and difficult diagnosis, any other disease or condition that changes, or challenges, or completely tears up the script of their own lifestory. Robs you of the tale of yourself you thought you were telling.

Because there is a universal difficulty that so many of us can relate to in PMSL and stories around sudden incontinence. One we might even re-relate to so many times in our lives. The bit where your destiny and sense of yourself, the momentum you thought you were creating, is kicked off its path and shown to be a complacent lie. You in fact had no control at all – urinary or otherwise – in the first place.

And this, the devastation at being wrongfooted by a nasty health turn of events, the grief of health trauma, especially if shrouded in silence and hard to talk about, is true regardless of whether you are one of life’s planners, a goal setter, someone with defined hopes, or if you were altogether more relaxed, riding along on the seat of your pants with just a gentle sense of optimism.

When that script changes outside your control that is a real kick right in the girl-space. It is a deadening, deafening blow. And the reverb is pretty strong for months, sometimes years.