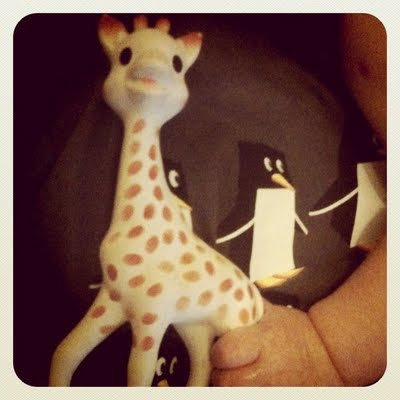 I give too much away about my Dad-rock tendencies in that post title. It almost prompts me to reveal one of my great regrets: that according to fansite sources, Springsteen had planned to play Glory Days at Hyde Park with Bon Jovi but the council pulled the plug on such a noisy late encore. How I wish it had materialised.

But I digress. And must confess the title of this post should be a pun on ‘brand’ and ‘new woman’. Newborn has hit his half year. Hooray for him. Happy Half-Birthday my clever gorgeous lad. Four teeth, a bad temper, a winning smile, you have everything. His fat belly quivers with love and laughter, even though he has another temperature, and he still looks to check I am there even as he learns to be absorbed by other things (TV, his brother, toys). We all feel the love, but we’ve noticed he survives the day despite his snivels because he has a new woman in his life. Sophie, as in ‘Sophie the Giraffe’. Do you know Sophie? We know Sophie.
Her real name is ‘Sophie La Girafe’ and she’s a teething toy manufactured in France. She’s been on sale, and in the mouths of babes since 1961. Newborn’s, obviously, is newer than that.
I wish I was cool enough to avoid consumerist tendencies, but I’m not and shamefacedly attribute huge importance to ‘things’. Do you know Sophie the Giraffe? (I know, it is like asking ‘Are you middle class?’ ‘Do you have a pair of birkies?’ ‘Do you know your Elephant’s Breath from your Pigeon?’).
Spider-boy never had a ‘Sophie the Giraffe’. I wandered aimlessly around organic toy boutiques and fingered and thumbed Sophies in their lovely retro boxes until he was beyond squeaky toys and I missed the moment. I knew it was nonsense, hankering after a toy as if seeing my son looking like the other babies pushed around my postcode would make us normal. But at the same time added it as a pencil in the margin of my list of things I had done wrong. Both not buying him the toy and then being too caught up in my self-absorbed nonsense and paranoia and self-loathing to allow him to enjoy himself even without it. I got over myself, of course, and caved and bought him a jellycat monkey which I found in a second hand store. It became an immediate fixture in all our lives.
With Newborn I was allowed off the hook. Someone else bough her for him and I felt like we were finally living the dream. Cute baby, check. No (or only a little) PND, check. The Zeitgeist middle-class toy of choice which combines the usefulness and baby appeal of rubber with an element of considered, fashionable cool. Hoo-haah, jackpot.
And how lucky we all are that she came. It is a great love affair. All clumsy toothed kisses, and new discovery. Every time he sees her he pauses and takes a breath -he licks her toes, gazes into her bust pupil eyes, he grabs and fists and hugs and squeals. And when he does that? Bites her and giggles at her and dribbles on her face? Despite an instinct to rage against the harlot who stole my lad’s heart, I get something different. I get another gift from him.
It isn’t a necessary gift, it is his half-birthday, not mine. In his 26 weeks on the planet his gifts to me have been generous already. He’s shown me himself, he’s allowed me to work things out around him, he’s embraced his ‘lot’ in life and his family without too much protest, he’s shown us his way and reminded us politely of the flaws in ours. He’s allowed me to step away from the shame of being thatwoman whilst reminding me which bits of me are all right.
But the greatest gift of all, is this…
When I see him, with his toy, I am pushed outside my shameful world of trying too hard to fulfil the loaded aspirations I have about being a mother. I forget, for a second, who or what Sophie is because I see joy dancing over his dimples and watch a proper love affair in progress, him experienced and taking the lead, her coyly squeaking in response. And once again I enjoy being put in my place. I’ve been cast aside by Newborn in favour of Sophie, but that’s good. His confidence proves she is Newborn’s second love affair. His second, after his six months of falling in love with me.