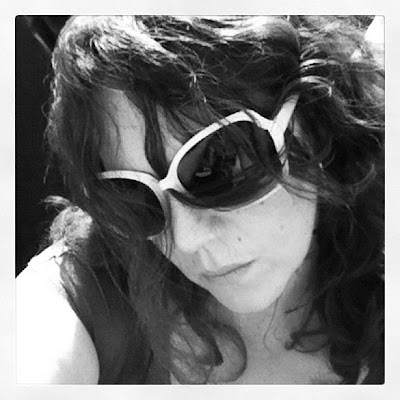 You sit around getting older. There’s a joke here somewhere and it’s on me…

It was my birthday last week. To celebrate I danced to Horrible Histories songs in the lounge and played Springsteen too loud for my own good. The quote above is, of course, Springsteen. It is from Dancing In The Dark which is less anthemic than some of his most famous songs, but remains perhaps his best known in running onto the dance floor terms, and was one of his most commercially successful hits. I love The Boss at the best of times but in the last few weeks this line, that song, with all its self-denial and impetus and charge and regret and love has been following me about in my depression.

Things have been hazy. That’s why I used the picture above, but also the one below. 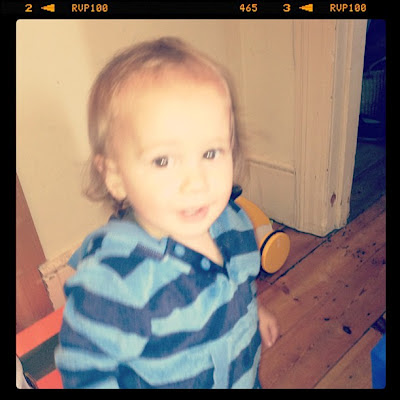 I know it is rubbish and blurred; no filters or special instagram tricks can save it. My husband laughs at me for loving it so much, but perhaps the combination of the shuddery fuzz and those staring, staring, staring eyes is what makes me want to blow it up 8 foot square and stick it on our living room wall.

The reason I appreciate the stare and smile (mirthful? judging? anticipating? happy? confused? bossy? hungry? I don’t know) is this:

I would say what the fuck he is, though that is too similar to my view of Moshi Monsters. His brother I understand so much more. I may not have the big cat/predator love or quite such an incessant interest in the minutiae of Birthday parties, but we share our over sensitivities, bellowing laughs, disinterest in wearing clothes, our big emotional rollercoaster view of the world. I can predict Spider-boy’s unpredictable mood swings. With his brother? I’ve no idea. And I find this is especially the case right now.

The blog’s been quiet because I’ve been overwhelmed. Suffocated by an inability to do much but hope (when not at work or involved in direct childcare) and sit around thinking sad thoughts. I’ve been praying too. Yup. Praying. Praying maudlin and morbid prayers to the ether (as I’m an atheist), but as fervently as when I did believe in God. I’ve been whispering under my breath, crossing my fingers, being sentimental and superstitious.

I know I’ve probably been no fun as I’ve been driven only by this groundswell distraction: but I’ve not known any other way to act when all I want is newborn (and some other babies I know) to stay well. To reach the mythical milestones. For newborn it is one month, two months, three (COME ON THREE), without a hospital admission or decline or giving us a fright. He’s made two months since he was last in a ward overnight. I’ve decided maybe that’s enough. Even if I can’t halt the fear, I can ease it and try to move on from the headachey pressure to think about little else.

My chest aches from nervously smoking cigarettes (not near him or in the house or anything, obviously, but as I pound the streets of Soho after work). But I can’t keep everything on hold and stop talking and thinking and writing forever. A part of me believes that if I write anything good about him I’ll get mine (and a by product of that will be him unfairly getting his to punish me). But a part of me also secretly believes that by worrying strongly enough, being a worrier warrior mum, I will keep him alive. I can’t shake this thought, I just can’t. But I can’t sustain the fear either.

Three things dragged me out of it:

The thing is, my son has changed. He’s really changed. And so much, all whilst I’ve been too scared to think about the present. In just two months and he’s put on some much weight he’s back on the 51st centile line. ‘His’ line in the red book weight charts, the one he was born on. And this is after dropping off the grid completely on just the 1st of May. Those were sorry days. He looks so different now. He has pulled off that trick whereby we now see how awful he looked before with new eyes unclouded by our desire for it not to be that ill.

But now he’s fat(ter). He’s also tanned. Regardless of my attempts with sun-block he’s like his grandfather, not me, and goes for gold in even the patchiest Summer. Best of all he catches me off guard by not catching his breath. He needs his inhaler, sure, but I haven’t had to sleep on the floor in his room with my clothes on and a mobile phone for what seems like forever.

I find as fog of panic lifts a little I see my son afresh, and he is so strange to me it is like giving birth all over again. I’m thunderstruck. Bewildered I heard myself go straight to the horse’s mouth this week. I stared into my toddler’s darling little mullet framed face as he clutched an Iggle Piggle toy while dancing round the lounge singing the theme to Gigglebiz and I said, not unkindly, but with feeling:

He stared straight back into my face and shouted: “Mummeeeeeeeeeeee”.

Then screamed with laughter.

He’s always been good at jokes, but I’m impressed with the devil in his eyes today. Like all toddler he would repeat the same joke for hours if I had the stamina, but he’s working on timing by the third repeat of this one. 19 months old and his eyes flame bright with anticipation. I ask again and he defers the inevitable, teases me with the possibility that he will change the game, perhaps say his own name for the first time. He starts snorting through his nose with anticipation, stifling a hoot of mirth and half laughs half shouts: “Daddeeeee”. But only the once.

The Boss knows the truth, and so does newborn. Wallowing and fear is no good, if I can’t do anything else the joke’s on me.