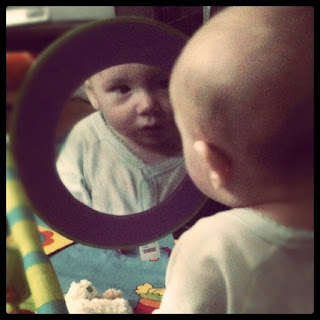 Spider-boy has another way of seeing the world which, like all childish wisdom, tells you everything you need to know about our family life and deepens the mysteries of existence forever.

While his brother was in hospital last week, with me, stuck in an isolation ward, Spider-boy had other engagements. As a bonafide schoolboy he had, of course, to go to school. Legal and everything, innit. This threw into chaos our carefully calibrated, one false move and everything falls apart, childcare ‘arrangement’. We are lucky, in the kindly friends who were prepared to step up and step in to help out.

One took Spider-boy back to her house after school. In the short walk to her flat he asked repeatedly if she had a mirror. She said she did, though she pointed out, so did he. He clarified ‘It’s just, I don’t know what I REALLY look like’.

It was as if he felt he would see himself most clearly reflected in mirrors away from his usual habitat, the uncharted territory offering a clarity of vision.

I thought about it, and walked around our house. Roald Dahl once wrote a wonderful leaflet for the then national railways about safety on the tracks. He said to truly understand a child, a grown adult should start by getting down on his/her hands and knees and crawling around, to look at the world from their point of view. Wise words. I walk around my house and note, all the wall mounted mirrors are at my height not his. All the handheld ones are in my handbag (cosmetic compacts), or on dressing tables/chests of drawers, again out of reach, things to be passed to him and thus only used when with us, his parents. He had baby mirrors, sure, those crackly plastic safe things, but the best they give is a smudgy impression, and the mirror in the bathroom he only looks in when his hair is sticking up with bubbles or shampoo

Perhaps his sense of uncertainty, his inability to be clear about his own image comes from this – as he has to be lifted to see into the mirrors they only come when he’s held by either me or thathusband, and as such exist only with our commentary in which we endlessly commend him and shower him in kisses.

His first word was baby, and I remember our delight, lifting him to the mirror above the mantle, or lifting down the hand mirror on a shelf in his room, smiling and encouraging and thrilled each time he declared who and what he was. How strange and poignant then, that that first proper word, the first clear transaction of meaning, that special moment in any human being’s life: the start of understandable communication with another, that beautiful baby in the mirror, is something he remains slightly sceptical of. We all wonder who we see in the looking glass, of course, but I love his desire to know if the ‘real’ him is the same when he’s outside the view of the him projected and created by us.

There are alternative interpretations of course. He was being precocious, telling a joke, aping a remark he’d heard somewhere else, they’d been talking about what mirrors are for at school. But I love the transparent murkiness of the conundrum all the same.