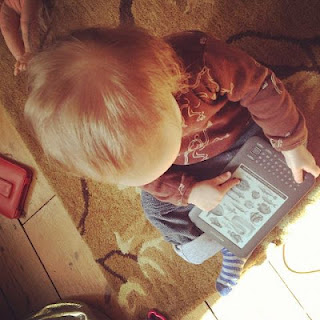 All children I know and have ever met have been obsessed with technology. I suspect it is somehow linked to their connection with the future – they are, of course, closer to it than us. Kicking off the edge of the past, as represented by us, floating out further than we can reach to find new depths and mysteries and magic.

This is why their mortality is so heartbreaking. Children are not the future, they are only the now as we are; they are just better at looking beyond it.

The holy grail of all toys in our house has always been the mobile phone. Both of my babies would have happily killed me dead to get their hands on one and I often catch the youngest copping a feel in my handbag just in case it is there.

When Spider-boy, well under a year, first actually got one to himself the first thing he did was lift it high, hold it an arms length from his face and look between the display screen and the distance. He was giving us a perfect lesson in our defunct-ness. For him, this lump of metal/plastic/glass was not a device for aural or oral communication: it was a device for capturing images of now. His experience of the world had taught him I had a special camera for him which I kept on me at all times.

I marvelled at this easy analysis of the actual uses and relevances of technology from his tiny brain. As someone old enough to remember university halls with just one payphone, I have had to get used to smart phones and learn to avoid the perils of too fat fingers and cheeks which cut off calls in between whilst harking back to a simpler time. I’m so bad I insisted on retro dial phones at home, as I so miss the safety of a heavy cupped receiver. But it is thrilling too.

They are helped, toddlers and babies especially, by many things. Their energy and lack of things to bore and worry them. Also their limited grasp of linguistic device and their developmental stages which, whilst holding them back, also allow them to see things for what they ‘really’ are. Take early obsessions, for example. Things little ones get mad for when they are first learning to gesticulate and speak: to say a word, or better ask ‘what’s that?’ Their awed cheeks every time they see a cat, say, or a car, or a train, or a dolly is brilliant. Unable (or unwilling?) to group things as we do, every cat is a new individual object to them. They are able and eager to fill their brains with new images and words and experiences for comparisons. This is how they learn. No wonder it is so exciting, and on occasion terrifying for them.

What grown ups gain in simplifying the world into known things grouped together, they lose in the simple spark of wonder that comes from being conscious of something they haven’t seen before. So complacent are we in the too-much-to-know-ness of our exhilarating world that we miss out or even become annoyed.

I knew I’d reached my saturation point when it came to planets. I was taught nine: NINE. I was taught that as a fundamental of the vast universe, and grounded it made me too. I even learned the nattiest bloody mnemonic to remember them and was eager to pass it on (My Very Easy Method Just Speeds Up Naming Planets, in case you are interested). But now there are eight. EIGHT. I felt an electrical crackle and pfft as that part of my brain shut down when I heard this cataclysmic planetary reduction on the radio. I’m too old, too old for there to be eight planets. That synaptic hissy fit at least ignited a burst of empathy – for all the times I groaned inside when my parents and grandparents persisted in long dead names for countries and capitals.

We adults, inundated and drowning in new things and old things must emphasis the collective to keep the world manageable. And we must hanker after the old and recognisable even when it no longer fits – we still call our mobiles ‘phones’, even though for many of us they have different functionality (they are for writing, drafting, reading, emailing, recording, media centres holding music, video, radio, games, creating wireless networks, sat navs and on and on and on). ‘Phones’ relates to communication, which these objects allow, but they are a slither of battery life which offer something more complex: a rendering of ourselves externally (by creating our image, doctoring it with filters, defying geography, editorialising our social image and space, and making us chameleons in our multitasking).

My mobile is rarely for making and taking calls, it is for exchanging pictures, taking them, displaying them, for storing ideas and playing scrabble, condensing thoughts/instructions/itineraries/jokes into brief text messaging, sometimes in code, checking in on the million social media streams which filter a view of the world back to me dependent on what I’ve done in the past (who I’ve liked and followed, what I’ve bought) rather than who I could be. Ironically, given my reliance on googlemaps to get me to new places, it is also for defying time and space so I can work and ‘interact’ regardless of where I am. I can’t work out how any of this works and at times must ‘learn’ to be ‘intuitive’ with my complex gizmos.

Newborn can. He is 3.5 years younger than his brother, but he rendered Spider-boy as archaic as me and my husband when he first fingered a phone. His mitts on my lowly BlackBerry and the first thing he did was hold it down in front of his chest, pause for a second then drag the second finger of his right hand across the screen with meaning. My little Smartie, he knows iPhones and iPads are the things to aspire to. Steve Jobs would be proud.

He then picked up my Kindle. He dragged his finger and the image didn’t even flicker. He tipped the screen to see if the picture moved. Nothing. He tried again. Nada. He looked towards the window into the sun stream considered for a second and tossed aside an object 5mm thick which can hold every book we’d house in our home. To him a qwerty keyboard and a 3G enabled library in his pocket: too old and out of touch.

And what was I doing, as he made this analysis? Taking his photo of course. On my phone.

3 Replies to “Technology baby: out of touch”