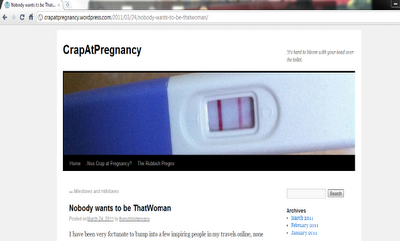 When Susan Sarandon and Tim Robbins (then married) made a political speech at the Oscars they were accused by senior flanks of Hollywood royalty of behaving like guests who repaid their host’s hospitality by pissing on the living room rug. I have just done something similar.
I was recently invited, very kindly, by TherubbishPregno, to guest blog about incontinence on her site CrapAtPregnancy (tagline: it’s had to bloom with your head down the toilet). I see her site as the online equivalent of the moment when anyone who has found pregnancy tough meets another woman who says aloud that she hated being up the stick. Genie let loose, the former can finally relax knowing she isn’t crazy, or ungrateful, or, crucially, alone. I wish her every bit of luck in this pregnancy, and commend her site for anyone who worries they aren’t as good as they should be at blooming.
This is the post wot I wrote. It is my muddled way of explaining what happened to me and my hope that women who have developed incontinence post birth should get help. It encompasses some of the themes of posts I’ve written here, notably the trouble with conditions that carry with them stigma on account of the embarrassment, humiliation, and taboo which surrounds them.
I fear it is a bit of a cop out though, as it is downbeat and demonstrates that I am pretty useless and coy myself for all my bravado – after all I can rant and joke and make bold remarks, stark descriptions even of both depression and incontinence. But do I have the mettle to really stick my neck out or am I pissing around avoiding the issue because I’m as guilty as anyone of finding it all a bit shameful? The answer is pissing around, of course, because I’ve posted somewhere else.
I’ve said before that one of the problems with incontinence, as TheRubbishPregno discusses in her far too kind introduction to my missive, is no-one talks about it so it becomes shameful and hidden and people don’t get help. And that despite it being so common no-one wants to be the poster girl for it, somehow, like its more serious older siblings the cancers of the embarrassing bits (penis, colon, bowel) it has missed out on all the super celebs prepared to be associated with it. No Top Shop tie-ins or ribbons for this family of nether region distress. Ulrika Jonsson did try once, and got some coverage but also some unsisterly nastiness (I saw her in a national newspaper’s what’s not hot section for talking about it – shameful).
So I link to my guest blog with slightly pink cheeks and the promise there could be more piss talk here soon.