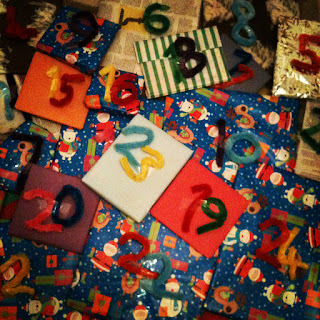 When I was pregnant with Spider-boy I spent a lot of time thinking about Christmas even though he was a summer baby and I had barely been scanned in December. The thing was I rather felt that festive traditions could sum up your parenting techniques, aims and hopes. I still do, a bit, though in my case realise they reek of good intentions, chaos, compromise and a few too many critical thoughts and chocolate buttons.

I read India Knight’s Comfort And Joy and totally understand that desire for the holidays to be mythically jolly, smelling of pine, full of love and good wishes and cinnamon scented perfect. I’ve seen a lot of sadness and worry this year and now am clutching a wind-up rudolph for luck as I hope that if it isn’t, you know, magical, at least NO-ONE WILL BE IN HOSPITAL which would be a start.

But way back, before real life had ever really bitten my bum I became a catcher and thief of ideas to make family Christmases special, pooling resources and happy memories with my husband, plaguing friends with questions about whether, for example, Father Christmas bought all presents, some presents, stocking presents, whether he was FC or Santa, whether presents should be opened on Christmas morning, spread over the day, saved until boxing day (yes, I met someone who’s parents did that). There was so much to learn and re-evaluate.

We have tried though, especially as the eldest is now properly into the whole festive thang, to instigate more of the annual ideas we heard about and thunk up.

In our house Santa fills stockings and mummy and daddy lay out other gifts. I earmark a new decoration each year for the boys in case they ever want their own Christmas tree box, and we have hot chocolate before bedtime and the same poem every year as a story on the 24th.

The boys have new pyjamas on Christmas Eve, a snuggly idea loveable and revolting as the temptation to tweely play match up in identical pjs is too strong for me to resist. I stole another idea this November, and we made an advent calendar of books about yuletide, second hand (Mr Christmas, The Nativity Play, A Bush Nativity) and new (the National Gallery collection First Christmas), ones from our childhoods (Father Christmas, The Snowman) ones from theirs (That’s Not My Penguin, The Gruffalo’s Child), ones from the shelves which we’d forgotten were Christmassy (Stick Man, Cops & Robbers) and, not yet opened, waiting for Christmas Eve the tattered copy of ‘Twas The Night Before Christmas which my mum used to read me and my sisters every year.

Today I bought my son’s annuals, to stand proud by their stockings and entertain them (ha!) when the eldest wakes. The youngest will presumably slap his and fashion it into a teether/come weapon, as his brother will no doubt deem it a favourite present. He, the lucky so and so, is finally going to get the armoury of knowledge he needs to play Ben 10 in the playground (in my terrible middleclass-worry-too-much-about-everything-mum way, I’ve not let him see it but feel I should at least give him something which will mean he doesn’t get so bemused about aliens and magic watches and then get left out because he doesn’t have the lingo).

There are of course other modern traditions which I am grappling with too. Those created by our culture of consumption and panic shopping – I am trying to organise our present tally which convert the poor spare bed like a sorry for itself broken sleigh but I am overwhelmed by the task. Once again I’ve tried to stagger shopping and now found myself in the land of is it too much or not enough? I am channelling Eric and Ernie this year – I seem to have all the right presents, just not necessarily for the right people. Next year everyone is getting a jumper.

Then there are ‘new’ traditions imposed on us, or at least me as I am a chump and a try-hard, by the salted-caramel sticky tide of Nigella-ness around. Should I make a baked Alaska? I should, shouldn’t I? And my own minced meat, and a full turkey for the two meat eaters, and my own crackers. And bread sauce must be as easy as it sounds for the I Don’t Know How She Does It working mum to fit in around work parties, deadlines and school holiday childcare, mustn’t it?

And there are other new ones to get my head round with a schoolboy in the house. The Early Years / Reception Christmas Play, for example. Here’s a lesson. If it says arrive 2pm for a 2.30 start get there at 1.30. If you arrive at 2.00 there will be no seats and you will be condemned to watching your son via the screen of some swine in the front row’s ipad2 held aloft and in the way of any unmediated viewing. Similarly, do check your child’s book bag very thoroughly, lest you find yourself on the last day of term trying to winkle out 30 spare cards to dole out after being under the impression he was just happily hanging with one or two kids every day, or even worse having to snaffle a costume out of the washing bin one sleety Tuesday morning.

Mainly though, I cast my eyes around and note that our family take on xmas is possibly best summed up by our ever growing box of homemade shit decorations and the mild panic I feel that I don’t have some cheap plastic Santa and fake holly to position on my cake when I get round to making them. I am the worst sort of hypocrite, I have a subscription from my mum for Living Etc which I avidly read, but must confess I’m a shameful fan of glittery kitch and home-made (rustic?) cardboard crepe paper creations – ‘is that a mouse? a reindeer? oh, a Gruffalo!’ and hanker for the bygone days when schools used pasta to make things (though I understand why they don’t any more).

We put our tree up early, and I enjoy catching my hair on the string of trees pegged up lovingly though they were made 2 years ago with ‘toddler’ enthusiasm and style for glue and stickers. And as I pull dusty glitter from my fringe I sometimes wonder if back when I weed on a First Response and got that life-changing Etcha Sketch, when I was also buying presents, whether the desire for a Christmas box and a cluttered mantle piece of felt and glitter wasn’t the one most realistic, and now most properly satisfied idea I had about what being a parent was.

One Reply to “Traditions, Traditions”