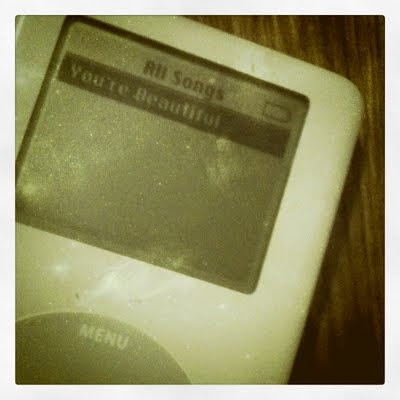 I’ve been thinking a lot about this, and been amazed how some trivial thoughts can cut in and demand as much of your attention as far bigger, darker or more important musings.

It started when a close friend and colleague (he who saved me on SPD-day) remarked to me and some others on his abhorring of a particular kind of TV drama. Usually American, usually angsty, populated by beautiful, young, usually angsty, characters and infiltrated, swamped and sometimes drowned in, usually angsty, music designed to tell you how to feel. Interestingly the music is often British, either to give a generic transatlantic cool or because the producers believe something about this island’s damp weather permeates the tracks.

I was forced to admit that I am a sucker for such manipulation, and that particular brand of, often British, musical melancholia, aware though I am of how badly it reflects on my kudos. When pregnant with Spider-boy I almost had to be carted off when Abby in ER had her C-section and hysterectomy. I howled on the sofa hysterical until my husband offered to turn it off. ‘Noooooo’ I wailed, hiccuping sobs, staring into the screen like a madwoman. ‘If you turn it off I’ll (hic) never (shudder) know (deep breath) what (shuddering deep breath) HAPPENS!’ The gynaecological, pregno madness high drama did not help me, of course, nor the fact that I’d been watching ER woman and girl, since before university through relationships, singledom, co-habiting, marriage and now this my first term pregnancy. Neither, however, did the painfully patent spoonfeeding of emotion through the soundtrack, which I have a horrible feeling came courtesy of David Gray.

This wasn’t even the worst of it. When pregnant both times I found myself sobbing in the kitchen to Casimir Pulaski Day by Sufjan Stevens (although at least in that case the song is classy and incredibly sad), and You’re Beautiful by James Blunt (which is far less classy, let’s be honest). It isn’t just pregnancy though: a few weeks ago, at Camp Bestival, ignoring the swathes of self-loathing from other middleclass campers somehow embarrassed of their hunter wellies, I almost sobbed when Justin Fletcher (yes, MR TUMBLE) sang the goodbye song from Something Special, unaccompanied, with 20,000 toddlers and parents joining in.

Around my time making and birthing and bedding in with Spider-boy I became briefly obsessed with Grey’s Anatomy, which is a very bad offender too, notorious for its use of the songtage to tell you how sad, or worrying, or jubilant, or angsty, usually angsty, its characters are feeling and therefore how close to tears you as their audience should be.

But I digress. The conversation deepened, between my colleagues and I, as one wondered how her life would pan out and to what soundtrack. I had a hideous realisation: I think, sometimes, as I am a daydreamy sort, I kind of do think my life is playing out like a US glossy drama with slightly obvious music, a capella for really important things.

I wondered, actually, if that was one of the reason birth was such a shock to me. Studies have been done on the traumatic nature of TV and film births, and the fact that this contributes to birth fear amongst expectant mothers. For me I suspect the opposite was true. I think perhaps somewhere in my first time pregnancy denial I had actually turned reality off and began to anticipate the future neatly packaged in a story with a defined arc and maternal caring cyphers to carry me through a birth which followed a narrative which was simple and undetailed. I’d begun to forge a fantasy, using the only real birth ‘experiences’ I had to date which I could bear to believe (namely Daphne from Neighbours). And in doing so was faintly surprised when my birth wasn’t accompanied by Joss Stone or someone singing unaccompanied, slightly husky versions of songs from the 1950s with ‘baby’ in the title, rounding off with Johnny Cash’s The First Time Ever I Saw Your Face, or something by Mushroom Music as the camera pulled back on a tableaux of me, the husband and the new person all beautifully lit and looking young and peachy skinned.

What this says about my imagination is, of course, embarrassing. And it is hardly an advert for the DVD of my life which would, presumably, have a self-involved self-deprecating commentary from me, naval gazing at every decision I have ever made, a druggy interlude full of high frequency ultrasound and strobe lighting to reflect no-one sleeping for four years, several repeated scenes and anecdotes, some cracker style jokes made with too much emphasis and a host of deleted scenes in which I am pregnant and crying down the phone to an array of poor bastards in Customer Services departments across the land.

My colleague is one better, though. He said the DVD of his life would simply be Liverpool FC winning the Champions League intercut with a static shot of him eating a plate of pie, chips and beans to the strains of the Kinks singing Waterloo Sunset. On a continuous loop.

What would be yours?