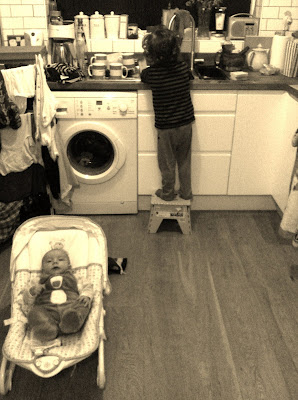 Many blogs I follow take a day out a week for a ‘silent’ post, where the author puts a picture either taken that day or from their gallery to reflect their mood. Today, I’ll ask you to shhh, but must apologise for my inability to offer you a brilliant picture for your silence.
Newborn is making up for the fortnight of puke, with a few days of frantic sucking. Last night a generous estimate would be three hours sleep. Today he’s settled briefly but mostly wanted to be feeding or sleeping. Or, as he is doing right now, breastfeeding whilst sleeping making a sort of suckle snore sound. The sound and fevered snortling motion prevents me from napping whilst he’s at it. As the song goes, ‘everyone’s a winner, baby’.
Lack of sleep moaning is boring though, and I note it only to remind myself in future weeks if he goes at it again like this that it is possible to survive growth spurts. What interests me is the sounds though, conjuring so much.
Today sounded of Sunday and Spring. If I try to unlayer the day, and think about it like a radioplay so many elements make it feel like London, end of winter, definitely not a school day. I feel transported somehow into another time, like falling through space. I can hear a radio, in another room in the house next door, a car starting up, washing up, gas hissing under a hob of batch cooking, someone mending a motorbike, the hum of the fridge. I realise it is the brilliant sound of pottering layered with distant traffic – as evocative of the city outside working hours as the clonk of cork on willow, thudding teenage feet against a bus shelter (as they fidget and handstand), thunderbug buzzing and lawnmowers is of sleepy village life.
Before parenthood I was worried about two sounds, mooing in labour and screaming children. The grave fear of both was misguided – I didn’t care AT ALL about doing the former, and could never have anticipated the stress of the second whenever it occurs.
I’ve noted Newborn’s loud, proud truffle hunter snuffles and snores before, and his gorgeous giggles. He’s added this week a clear, moany, differently pitched, chattering. He engages with monologues, often as he stares at that back-to-front baby and Ma (who’re following us around and copying our wardrobe), but, if I’m especially lucky, with me. It is like a conversation with its peaks and troughs, its pauses and rhythms, quite whiny and sometimes mistaken for a cry; his singsong ranty sound is not unlike me going off on one about some perceived injustice.
What amazes me is the way the sounds of my boys has become part of my world and the fabric of my memory. They change and fade or shift like an age-old quilt but smell to my ears of home – Spider-boy’s baby burbling is now speech with added accents, idiosyncratic catchphrases, jokes. The clicks of his toy buses’ doors, the sound of wheels on wooden floors, the satisfying husssh of duplo bricks preceding their clatter to the floor. I am so uncreative and lacking in musical talent but these domestic symphonies are forever the era of us and our lads.
Perhaps my favourite is the sound of heavy breathing from a little body. Concentration so acute and unashamed. Sometimes the bassline beat to the wrinkling and tinkling of the baby gym and grunts as Newborn attempts, again, to roll over, or accompanying the clonks of animals loaded in and out of Spider-boy’s double decker as a complex circus zoo traffic jam is built. It seems to represent their uncompromising, unembarrassed dedication to themselves and the tasks of their little world. Hear here!

2 Replies to “The sounds of Sundays (hear here)”

Leave a Reply to The Mule Cancel reply