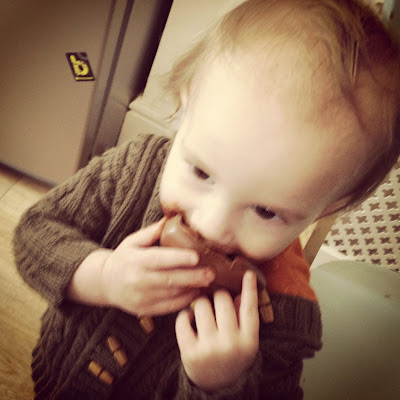 Easter. So much sweet stuff; so little time. My lads love chocolate, though Newborn has a faith of sorts in cocoa. He attacks eggs and bunnies, crams so much in his mouth. He’s prepared to let a third dribble away to get the rest in, and he scoffs with suspicious eyes. They are live with triumph, and you can almost hear his mind: if I just keep eating it and don’t say a word, *they* won’t realise they’ve given me so MUCH.

Reading their mind is a fool’s errand, but so tempting. Talking to a friend today, we speculated on what the hell *they* are thinking. I’d love to believe it was a fantastical dreamlike place, all precocious interpretation with a hallowed view of me; I fancy it is something far more brutal. That what goes on in a toddler’s mind is probably even more punitive than my inner mummy critic.

Take this week. Post egg hunts we came home to London a baby light – Spider-boy was staying with Aunties for his school holiday. I was so sad, my walk from work devoid of endless questions. While he stayed away, the rest of us made an odd threesome. There have been times when I’ve been alone with Newborn, but they’ve usually been horrible times when he’s been ill. And there have been fleeting moments between play dates, and the worst of times of all (hospital) when it has just been Mr Thatwoman, Newborn and I. I’ve tried to find the good in those situations (afterwards at least, I’m no Pollyanna) and enjoy the moments with this strange, beautiful other one. And I fret he’s often relegated to ever-bridesmaid: trailing behind, looking cute, always getting sloppy seconds.

He’s so fond of his brother right now, though, and I was convinced, so sure, that he would pine. Just like he pines for Mr Thatwoman on the nights that I collect from nursery (which he does with toddler subtlety, by standing at the front door sobbing till he hiccups and shouting ‘Dada’ with increasingly hysterical volume).

Newborn’s capacity for novelty remained, however. He developed a strut. He surveyed his new command posts, seconded a kitchen stool, worked out how to drag it round and reach the saucepans and the Calpol. He honed new skills, hijacking the telephone, learned to step forwards, not back, down the stairs. By the second night, he’d climbed into his brother’s bed.

He sat, smiling, all cheek and bedtime eyes, my Goldilocks. I thought: wow, usurping something as painfully symbolic as a bed in our house is pretty cool. But there was something else in his sleepy dimples: a question. When he’s querying me or the world he pulls his chin down,and exaggerates the angle he has to look up. It was as if he was saying: have I done it?

I was minded of Spider-boy’s assertive look when he asked: ‘And who will be his mummy?’ after grudgingly conceding he was going to have a sibling. And his later, semi-hopeful, probing in the last weeks of my maternity leave: ‘Now you are going back to work, is he going back in your tummy?’

Next day: the same look. Newborn is especially keen to get his hands on the chocolate tin. And so proud he squeals when he realises the small chair can also be used mount the worktop though I’ve confiscated the stool. His sigh of pleasure and furtive glancing round while he snaffles a shard of egg makes me wonder if he has his own magical thinking. Perhaps, I think with slight horror and awe, he thinks the chocolate is a magic force, keeping his brother away?

Today after completing his round, touching every single thing his brother has ever owned, he finds the last bit of chocolate in the house. We’re a household of instant gratification: the Friday after Easter is way past the stage where a smashed Lindt bunny might be hiding in the fridge. He points at my handbag for 10 minutes making a guttural, insistent groan. I fish out toys, and a travel card, my phone, a purse, a pen. He screams at kettle pitch. I pass the bag and say: ‘OK. What do you want? You find it!’ He discards the trove of tickets and loose pennies and unearths a Finger of Fudge which has been there so long, I’d forgotten it exists.

He crouches like a monk and eats, bowing his head and glancing up through his lashes: once more with feeling. He moans with pleasure, chuckles to himself and opens an eye. Maybe he imagines that if he eats even more chocolate his brother will come back, I hope.