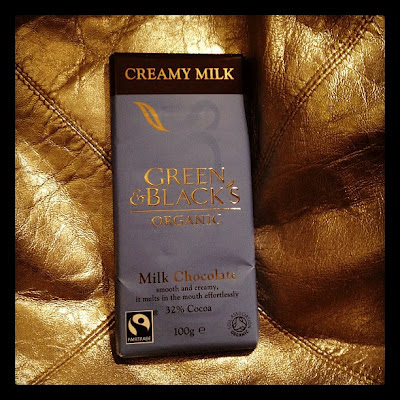 Spider-boy has finally discovered the joy of a proper bedtime story. One that stretches out over a week or more, a longer narrative worming into your brain as you snuggle up to someone you love. It is one of the things about parenting I was most excited about. I am still. I don’t even care that mostly daddy is the go to reading guy, my sentimental side swells anyway, our boy: curled on the sofa, listening, waiting, scoffing up words and tropes and brave new worlds.

But books at bedtime can bring many perils. I’ve noted before a pamphlet I adore by Roald Dahl, in which he explores the world of the child and dismisses the way many adults talk to children saying they have completely forgotten what being a kid is really like. I think this can be very true – most interestingly when we are trying to foist onto our offspring things we loved or enjoyed ourselves, the hallmarks of our own childhood passed on down.

There’s a disconnect (often by a year or two), in my experience, in our recollection of age. We think we remember being four, but do we really? This is why, I think, people often tell toddlers off for whinging, bemoan three-year-olds for being boystrous and chastise four-year-olds for being physical and impatient and babyish. Hardly any of us truly remember those ages that well, we have fuzzy snap shots, but because of those pictures and the familiarity of our children (echoes of ourselves and siblings) we feel like we have the whole picture.

In our parental fervour to pass down the stuff we so cherish now, many of us jump too early. So keen are we to introduce our child to the things we enjoyed – films, books, toys, games, places to go – we often do it when the child is just a bit too young. This said, the opposite can be true. We can be too fearful of letting them learn life’s lessons, of finding out there’s more to everything than Guess How Much I Love You.

I have done this with books, books which I remember loving, and therefore were probably books I had when I was at least Spider-boy’s age now, not when I bought them for him (when he was in my tummy!) And with reading aloud books, we tried to be careful. He bedded in for The Animals Of Farthing Wood, and prepared for the grim and gross by Horrible Histories and the like, had a rapturous rapport with The Twits. His imagination ballooned and his eyes jumped out when we told him about George and his crazy dad, marvellous medicine and grandma with a mouth that was puckered like a dog’s bum.

And so we moved on to Charlie (he of the chocolate factory). I was reticent, Husband was terribly keen. Tantalising chapters of chocolate waterfalls and minty grass, snapping candy memories of words that fizzed your brain like Refreshers in CocaCola. But I was wrong. As things began, the fudge whippled magic took hold: Spiderboy was hooked. Charlie is so lovely. Grandpa Joe is such a treat and Wonka, so crazy and odd and mythical and, like Dahl, unpredictable. It was only once we were a couple of chapters in that I realised what was going to happen: I was going to watch hope die. I had to have faith it was worth it.

The great thing about hearing more complicated stories than you could manage to read on your own is being sworn in to the mysteries and magic of playing the long game. My son was being pushed on to revel in adjectives by Dahl’s linguistic fiddling and made up words, and forced out of his comfort zone in terms of suspense, narrative, literary devices like metaphors, and the confusion of reliable and unreliable narrators. The relationship between author and reader (or in his case, the bit in daddy’s normal voice and how that speaks directly to the little listener) was especially novel. Trust is on the line too. Spider-boy’s books up until then are mostly short and no author has ever dared to disappoint him. Books for young children are usually sweet and quickly resolved.

The gratification is deferred, of course, but only really for a page or two, and that at most is a couple of paragraphs, if not only a couple of words. Bobo gets his mummy soon enough in Hug. If the suspense is longer, that isn’t because something bad has happened – and the wait is rewarded with picture flaps as in Dear Zoo or humour, as in Pooh Is That You Bertie? or The Mole Who Knew It Was None Of His Business.

The trouble with Charlie And The Chocolate Factory is the build up is so confectionery sweet – Charlie’s starving, he gets one chocolate bar a year, there are golden tickets to A CHOCOLATE FACTORY in chocolate bars, he’s nice and sweet and deserving and hopeful. It is like anticipation for Christmas – we all know our mums are fibbing when they tell us about kids who really did get a stocking full of coal!

Spider-boy started to talk incessantly each breakfast time about whether ‘tonight is the night Charlie gets his ticket’. He’s enjoyed the build up, now it is time for Charlie’s birthday when he can win his golden passport in to a building full of sweeties. Mr Thatwoman and my sister who was staying with us got excited too. But they had forgotten who they were dealing with. They had left Roald Dahl behind in childhood, to allow it to get a rosy glow and fudgey memory defined by the final satisfaction of his twists. They now only remembered the best bits of his books not the specifics: they were as naive as Spider-boy. (I had the foresight to write my dissertation at uni on Dahl. I knew he doesn’t give you your sweetness straight away; he’s not that stupid or that condescending, he’s interested in toughening up his readers and is a pretty good judge of what they are tough enough to take – see also his descriptions of war and death in Boy and Going Solo).

As Charlie opened his chocolate bar, to find just chocolate I felt the room shift: Spider-boy’s eyes flickering with all the stages of grief and back to anger. The sacred pact of spoon-feeding from all his other books and television and film was broken. He had been cruelly crushed in his expectation of happy endings (or in this case Charlie’s happy beginning). He’d learned that things don’t always work out as they should. See: 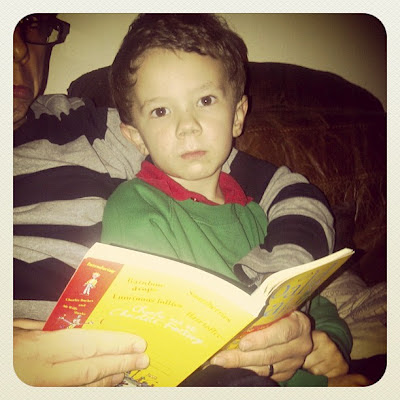 Husband and sister exchanged the ‘eek’ face. I mouthed ‘told you‘. Spider-boy dared to push on. I knew at this point I would have to leave the room. As I knew, again what was coming. Grandpa Joe made a plan. A plan to buy another bar, I could smell the (misguided) relief from the other adults. An old man, a starving child, one chance thwarted, the daus ex machina of a secret coin saved under the covers of a bed of dying pensioners: we all know how that should work out. Spider-boy latched on to the literary device of a gift from the Gods, and to his faith in goodies and baddies and who should triumph. And he, the foolish darling boy, he hoped. Bam: no ticket. 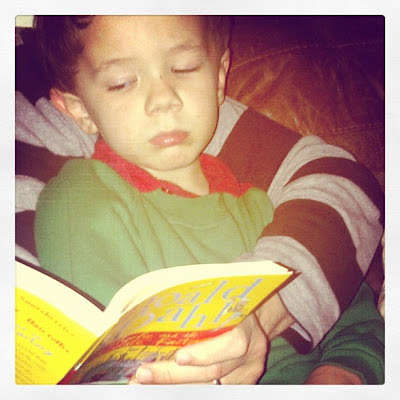 My heart was nearly torn in two. And it was gone 8pm. Time for bed.

The next day son woke with a slightly broken voice. ‘I just don’t know‘ he confessed, ‘how Charlie will get a ticket!’ It was as if he’d been thrown into confusion over what books would and could do: challenge, fib, upset us. It was a foundation stage version of John Fowles – had he been hoodwinked by a lying cover, was this book anything it promised to be?

Thank God for the next night and Dahl’s final surrender. Not without another hiccup – even the luckiest bar bought with the luckiest find for a starving schoolboy: a coin in the snow, even that doesn’t yield a ticket straight away. I have a theory that by making Charlie give in to baser instincts and buy two bars not one Dahl was underscoring punitive theories of surveillance – somebody somewhere notices when you aren’t as good as you could be (Charlie after all should save the second bar’s worth of money for his folks). But in practice the real lesson was for Spider-boy – he had to learn to be teased. A better life lesson that, even better than the bitter truth that sometimes people as nice like Charlie don’t get the nice things that should come to them.

He learned that really good books might do more than just give you a happy ending straight away. He now knows that some bets are off in literature, that stories have twists in their tales. And he’s experienced a writer prepared to toy with him a bit. Which is good because it has forced him to a point of being discerning. When he picks a book he has an inkling he had better be bloody sure he’s in a safe pair of hands. He might not get what he wants or what he expects from Dahl, but for all the fear that you have to ride out with books which don’t kowtow to sentiment on every page, the rewards (whether it is laughing out-loud at something ruder than you can believe a grown up would write, bubbling with mirth over a witty observation you can tie in with your life, reading out a long word like c-h-o-c-o-l-a-t-e, or good triumphing in the end) can be astonishing when it comes. 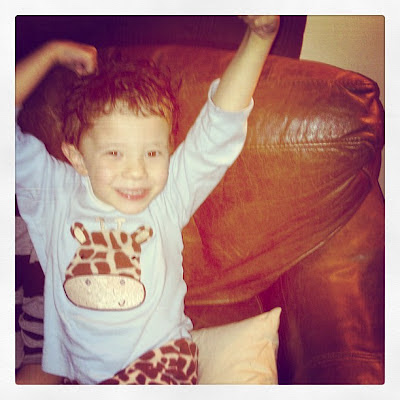 And I’ve learned that chocolate has a magic power for him, as it does for his brother, even when it is only a long word written down.

7 Replies to “The Power of Chocolate 2: When good books go bad”