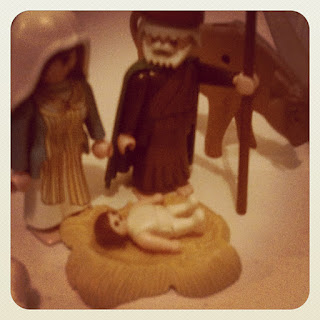 I am trying to make sure my son knows the nativity. If nothing else, in this secular world, for pub quiz reasons as it is the sort of thing he should know. Also, it is a story I love very much, although as I’ve noted before I don’t believe in it. I like the sense of social spirit, the (realistic only just generous) kindness, the warmth and simplicity of what is said, and the underscoring of birth as an outdoorsy, animalistic occurrence. I also feel touched and kicked into touch about my furious indignation at the horrors of the postnatal ward. However horrific feeling you might die on dirty sheets, presumably similar sensations on a bed of itchy straw surrounded by rats and men coming for a gander in the starlight must be worse. Especially as neither Luke nor Matthew say anything about gas and air.

I’ve noted before that I wish the innkeeper’s wife had been more prominent though. Indeed every time I hear of that famous delivery I wish that some women, any women were in the story. Women with strong hands and scrubbed faces, old and wise and used to lifting others to standing to make the task of catching the baby seem easy. Women with cool water and bitter herbs, holding Mary’s hand, perhaps even demonstrate the wherewithal to sing happy birthday to her son while she panted through those first mothering moments. I, of course, have not sired immortals, but I feel kinship with any woman in that moment of realisation, the first sight of your child and the thundershock of change that occurs before even the love hits you. A friend once remarked to me the first thing she said on seeing her firstborn was ‘Oh SHIT. What have we done?’. I can empathise.

We have a playmobil nativity set. It is a beautiful thing, a plastic wonder bought on a whim for a Christmas party at a flat we rented moons ago in Willesden Green. At said party, which must have been good as I woke up to two guests on the sofa and the spaghetti tongs in the large empty sticky vat which had held brandy filled mulled wine, some bad stuff went down in the cardboard stable.

I remember my wise best friend giving me a talking to. ‘I don’t believe in God,’ she said ‘but what you are letting them do to that nativity scene, you’re going to hell for that’. I glanced over to see Gabriel doing the rude with a wobbly plastic sheep as Mary was getting a filthy kind of adoration from one of the wise old men. Merry Christmas indeed.

Spider-boy sees no parallels with his life and the stable as we unpack it along with the strings of cardboard Christmas tree and growing collection of unfashionable ‘rustic’ Christmas tat that I love. He listens, as usual, with patience and only occasional sighs as I recount the story placing out the smiling figurines with zig-zag haircuts. He doesn’t understand why you would need to go on a donkey to write your name down. I think he’s secretly pleased, however, that no-one has told the story to his school teacher, as he finds her ‘demands’ that he goes inside to practice his letters on the craft and writing table annoying enough. And he actually rolls his eyes and exhales at the idea that a baby’s birth would herald, or be heralded by, a new star in the sky. He likes the bit about the mummy and daddy though, and has a smile of satisfaction when the story ends without a sibling being born.

As I conclude too early for the story to have proper resonance, preferring my Jesus small and squawking in the straw, not nailed to some wood with his mother weeping at his feet, he senses a need to comment. ‘I know that story already’ he says and I realise that though his class performed in a version of The Grinch rather than a traditional nativity, and there was no God-ness in the script or jazz standards, he’s picked up enough of the tale from the carols he’s heard out shopping all week. ‘But it would be better if it was like that song and it started with a lonely ox’.

One Reply to “The cattle are lonely”

Leave a Reply to Muddling Along Cancel reply