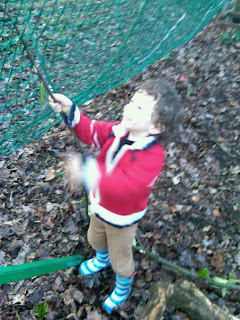 Well, less snails, but I was eating lunch today with some fabulous, self-confessed former spogs (smug parents of girls), talking kids and gender politics. They have a wonderful 4 year old girl and a beautiful one year old boy, we have two lads 3.5 and just over 0. We were speculating not only on how some of the cliches are often true (boys being more physical, girls more verbal at some stages, say) but also how some things could be attributed to role in the family (only/eldest child, second sibling etc) and/or explained by social attitudes.
A well worn theory doing the rounds of seasoned Mothers came up, namely that little boys are a lot like puppies – beautiful, loyal and adorable as long as you don’t expect a tidy house and take them for two good walks a day (rain or shine). The analogy is clearly affectionate, and came from feminist Mums who love their boys and girls equally and joyously. We all went to the park. A park where my son regularly collects a stick (often sifting through several for the perfect one) then runs around with it as if it is made of GOLD only dropping it to roll in some puddles or piles of leaves. My son screamed with delight on the swings and screamed with exuberance whilst climbing on everything. Then their daughter picked up a smooth stick and tried to bring it home with her. So much for theories, at least neither shat on the grass. Hmmm.
But witty generalisations aside it got me thinking about how easy it is to diss boys. So easy. When I was pregnant with my first some people actually winced when I said we knew he was a boy. When I was pregnant with my second people were vocally sympathetic. Aside from how utterly complacent any gender chat is, given the many people who would like a baby whatever size, shape and flavour, it is just so rooood. Imagine how uncool it would be in almost any social situation to express huge disappointment with a girl? Or offer a pregnant woman sympathy because she was having a girl?
And I am one of four daughters and comfortable enough with my love for my lads that I can talk about the strange sensation that occurs when you never have the daughter you always imagined you would.
I get where some of it comes from – my Mother, who had us girls in the ’70s and ’80s, has often been quite vocally anti-boy, which I’ve always attributed to her shaking off the shackles of outmoded boy/son/heir attitudes. Others of us would feel squeamish to be linked to cultures where male children are highly praised and favoured and girls are often at best uncherished. But I’m sure the answer is not to be anti-boy.
I think of all the words so often attributed to little boys: naughty, aggressive, cheeky, boisterous, loud, violent, physical, competitive, academically poor, unable to concentrate. And what worries me is not that they are unfair and untrue (although some are loaded and most could be expressed more positively, or at least neutrally) but that many are linked to developmental differences which are commonly seen. And that therefore my toddler boy could be reinforcing negative ideas about himself, just by being himself. It is better than being unwanted and downtrodden for the rest of his days as many women are the world over – and believe me I’m a hairy feminist – but it isn’t right, is it? Surely we’ve come further than that.