Don’t worry, this isn’t an obligatory ‘we had a charming day in the snow’ post. Not that I didn’t enjoy some blogs over the last few weeks, or see some amazing pictures posted all over t’interweb showing kids in cute wellies, cheeks glowing in the cold, tableaux after tableaux of smiling through damp socks. On twitter and Facebook my timelines were filled: so many all-in-ones and woolly hats, so many snowmen – from the sculptural to the silly, via icy knobs and famous figures.

Some icy frolics featured people I know and love, others people I’m loosely linked in with via online forum and groups, by being a tag-along friend of friends, by being on the photo sharing applications and social media networks – like instagram and twitter they allow me to act out a fantasy that by seeing into someone else’s life (even someone famous) in this weird way I am connected to other human beings.

I’m not entirely sure I’ve come to a conclusion about social media but the recent snowy days did give me pause about the occasional way they tap into my own peculiar cocktail of social neurosis. Snapshots suggest all and nothing, we know this – from pictures of Charles & Di which on the surface suggested a marriage in trouble but when shown in context revealed ambassadors on a sombre occasion, through every other celebrity stitch up in press history via the occasional shot of ourselves which misrepresents us to brilliant or appalling effect. Any 5 year old whose played on almost any educational website or children’s digital camera is well versed in manipulation, and in the digital camera age we are far more used to taking more pictures than we need and then sifting through, editing and gatekeeping to tell a particular story, than our parents were. Their family shots could be argued to have more validity for that – at least they seem to tell a more honest story.

The cheap nature of digital imagery, stored on hard-drives and websites, the possibility for millions of images where previously it was 12 or 24 (or 36 if you were really lucky/extravagant) means we use images with more editorialising. More, the shift to public albums which are shared, rather than plastic books gathering dust in the living room, means we do that editorialising publicly. In the facebook age part of our role in communicating with the world seems to be creating an image (using images) of ourselves, our families, our relationships, for the express purpose of others to see.

And yet pictures do seem to hold their false value for all of us, we still have faith in them to give us a truth, and more still to present a truth about ourselves. Despite knowing the opportunities for fakery and manipulation we put up profile pictures (of us, or something amazing or witty or classy we’ve seen) in the hope of showing something of ourselves to others.

I’m musing on this because when it snowed we ventured into the garden, but we have no pictures of the snow to show off. No family album of frozen fun to hold the moment and preserve it for a memory. Firstly because Newborn hates the snow. Who knew? Well, us, within about 10 seconds. He didn’t like to stand in it, despite his gorgeous wellies. He didn’t like to touch it. He didn’t like to look at it and he didn’t like it anywhere near his face. And hating something forcefully does play to his tyrannical modes of expression.

Secondly because even when we did try to get a snap Spider-boy was more keen on perfecting his slapstick by diving into the fluffy boarders (our garden became the ultimate crash mat) than shivering into a lens.

And thirdly because it had been a stressful week at work and home, medical bullshit, dreary money worries, thoughts with others in trouble, all the *stuff* that can make Sunday some impassive mediator between the struggle of the last few days and the dread of the next seven to come.

As the boys go, I see both their points of view. So does my husband. And it was clear within minutes that there would be no Thathousehold portrait of the cold snap, but we persevered (in vain) until our fingers were numb. Why? To feel that we were getting family life right by being like everyone else. To feel we could say ‘look we are normal too’ and we have so much fun, and we’re so cool and relaxed and great at being a family. And that’s the bit I really can’t understand properly – I know, right, that if we’d got a good pic it wouldn’t have been representative, but I’m so easily seduced by the idea that I am failing at mothering and family and other people are getting it right, that I was prepared to see the lack of a snow shot as disaster.

I don’t normally add notes, but a very kind friend @Laflafster donated a snow picture to me. It needs no particular introduction, apart from her lad and mine would be very good friends: 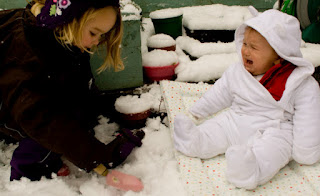