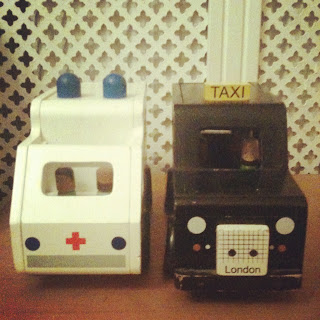 My faith in my city is strong, and my doubt in her is only a flicker. Like the occasionally blue flashing lights which catch a reflection on the street across my own and splashes onto my lounge window. If I stand in my back garden tonight the sirens are still surround sound. If we stand in our bedroom we can hear voices and traffic and nee-naws and buzzing (helicopters, I think). Yet this isn’t so unusual. We are sort of used to it. We live near a police station and a hospital, the roads are big the area is dense there is always a lot going on. The riots, yes, they are new, but the sirens no.

When Spider-boy was a baby we went to stay with my mother in law. She lives in a sleepy little village, with a tiny shop run by residents and a handful of buses a day. Spider-boy, already a dreadful sleeper, had a horrendous night. That morning we went walking through a tiny lane. He cried and writhed and screamed and shouted, and then an emergency vehicle passed the village. At the tinny siren call he sighed, and fell asleep. ‘London lad’, we laughed. ‘You can take the boy out of the city, but you can’t take the city out of the boy’.

I was proud my sons were born here and I feel so attached to their town mouse-ness. I like that about them. And it is palpable, even though they are very young that they are city-wise. They aren’t usually fazed by foreign metros, buses or roads.

Both my children were born in London. So was I. My early memories are of living South of the Thames athough my family moved up the country when I was just out of the infants. I only moved back in my early 20s but I’ve already reached the point where I’ve lived here more than I’ve not. I think I can call it my town. When the July bombings happened I felt so furious, and so shocked, and so palpably strongly pulled to the cracked tarmac beneath my feet. My grief connected me to the city under my soles. And yet tonight I feel strange. It has taken me until around 5 to midnight to work out what I feel. What I feel mostly is afraid.

Last night there were riots, horrible, desperate, frightening, intense, destructive riots in Tottenham. Later, our local shops were attacked. The high street was mesmerising when I went out this afternoon. My husband and I felt compelled to go in the pouring rain, to check in on @biggreenbooks, to see if the reports on twitter and online were true. It was fucking routed. The whole place. Highstreet names, independent stores. Greedy, outrageous, cynical, dangerous mobs had raged and stolen.

Simon from @biggreenbooks has written about his outrage, at the mindless and unpleasant criminality. The wanton disregard for neighbours and neighbourliness. The pissing all over a local economy and community, the sickening greed of it all. What has stealing clothes from Hennes got to do with police brutality? I appreciate it is rhetorical, and there are discussions to be had about deprivation, cuts hitting the most deprived the worst, breakdowns in links between authorities and communities.

It feels worse in a borough, Haringey, which lets face it, has a rank reputation, particularly if you don’t live here. I’ve always felt that the dangerous and nasty, beleaguered brutal Haringey was a fiction. A narrative about social decline which missed what I see every day: the optimism, the invention, the business, the busy-ness, the mix. There’s litter and bustle and lots and lots of people, for sure. But that’s what I find all over this city, even in the posh bits, it isn’t restricted to my area just because most people are poorer.

Tonight I waver. Not about the community, my community. Trudging through the shattered glass in the rain Wood Green people walked. In their myriad difference (age, gender, denomination, political persuasion, sexual orientation, race) they all looked and sounded the same – subdued, upset, shocked, angry. Openly talking their way past the ransacked shops, all of them unbelieving and fairly fucked off. Most of them talking politely to the police.

I flicker in my resolve just a small bit though, knowing what my kids could hear if they were awake, what they might have heard last night, and asking myself can I bear for them to be soothed by this anymore. Do I have the guts to ride it out? How I hope so.