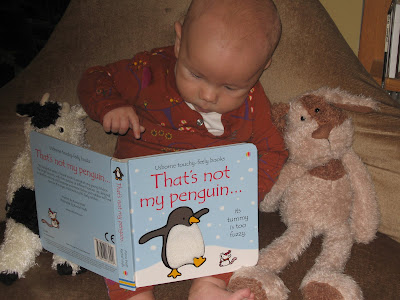 Have you read Not A Box? I became briefly evangelical about this book after Spider-boy was born. It became my present of choice for new babies that I know I will love and their parents. The cover is so stylish it feels branded by Muji, and the illustrations are a design-chic delight.

Like many of the very best picture books, it has a brilliant subtext in which the adult reader is relegated to role of (hilariously) poor observer, and the child being read to is forced to speak out and explain what is really going on. Unbound by the written word, they are free to notice and respond (with laughter or derision) and ‘correct’ the silly grown up who has completely missed the point.

In Not A Box a thoughtful and ingenious toddler rabbit is nagged by an unimaginative grown up to stop playing with a box. The rabbit is tied in knots by his lack of language, he can’t explain quite what he’s doing when berated for messing around in the box; but we onlookers can see he’s flourishing. He travels the universe, skips around in time, conquers, climbs, invents, drives and soars alone with his box. He can’t say what the box is because it is everything and nothing; all the magnificent possibility of his little world is found in folded cardboard.
Rosie’s Walk is like that, silly old Mum never able to grasp what is really happening as the fox fails to catch the hen. The Man On The Moon, is positively polluted with misplaced confidence on the part of adorable and know-it-all Bob and your daft folks reading it as they miss all the aliens and their scampy littering ways. And Shark In The Park, too, where the adult reader, and Timothy’s Dad, and even Timothy, have so much confidence in their frankly absurd assertion that they can safely say ‘there are NO sharks in the park today’.
I love them more than flagrant Mummy propaganda of sweeter tales like Guess How Much I Love You? Though that story of a nutbrown hare and his benevolently competitive guardian who loves him to the moon (and back again), is both lovely and loving it isn’t quite my cup of coffee. I don’t know exactly why the glorious pictures and a snuggling down at the end of the day message aren’t enough, but I think for me it is something to do with what emotions books allow us to try out.
As new parents books allow us to try out personalities on our kids. A friend of mine has a baby book which boasts, in a sticker on the front, a surprise mirror ending. She jokes her daughter, aged 3 months, will now KNOW the ending. I loved it when Spider-Boy could be propped up with his toys mimicking our motor skills and looking like he was reading to his animals. And I enjoy the joke for grown ups at the heart of the That’s Not My… books – after all, of course, that isn’t your puppy. It is a POODLE and yours is a spaniel, however woolly her tail.
But the best books I know allow the kids to flex their independence before curling back up under the duvet in that glorious regression of sleep. I am entranced at how easily almost every kid I’ve ever read to takes to the monumental tantrum allegory of Where The Wild Things Are. How reassured they seem that Max is enveloped by the real world kindness of people who ‘love him best of all’, and they are there, waiting, right at the very end, even though he had threatened to eat them up. Spider-boy pretends to be impervious to Sendak’s final reassurance, but would rail and rebel if I forgot to mention Max’s supper was still hot.
I loved these books, and love the delight and screaming and hilarity they provoke in my son and his friends. I like the way they force me to play the fool, and the flash of subversion in Spider-boy’s lump-of-coal bedtime eyes. It could merely be he thinks I am an idiot; I’ve prepared him for this by asking him the same questions again and again (I’ve had many a withered look from him at 18 months which said: ‘I told you cows say moo yesterday’). But I think he’s momentarily flirting with time, trying out a future where he’s the person in the room who knows the most about himself.
This is a good thing as we are approaching the cataclysm of Spider-boy starting school. For all the posturing and lying and competition and craziness that surrounds school choices and selections in North London’s chattering class corners it worries me most as it proves a time will come when whether I have all the answers or not is no longer the issue or the game. The time is coming (shudder), when Spider-boy will just be more interested in asking someone else. Tempted as I am to tame him with my magic trick of looking into his eyes and not blinking once, I think it might be more exciting to watch him fly.

3 Replies to “Reading too much into things…”