I loathe the phrase ‘quality time’. Possibly because I can’t work out what it means. And I am both suspicious and indignant about things when I don’t know what they mean (and everyone else seems to). I’m told my husband and I should have more of it. And I should feel guilty for not spending enough of it with my children.

Personally I think time is precious enough without fetishising some of it to the point of making people feel terrible. After all, I have to remind myself each day when I want to whine – whine like a toddler at half past seven whose mum is still fannying around trying to sort out tea and then presents me with a carrot, an untoasted bagel, some too garlic-y humous and an apple for ‘pudding’ as if I should be grateful (what?) – that however much I would like more hours in the day, that is never going to happen. There is no more time. There’s just 24 hours. That is it.

The massive flaw in the ‘quality time’ guilt trip is that no-one is admitting what they would really like to do with any extra hours some clock-God could throw at them. Well, maybe everyone else would climb Everest, or teach their kids Cantonese. I know what I would do: I would sleep. Sleep and maybe indulge a hangover with a morning in bed or just do a pee in peace whilst my children were somewhere else. And then, perhaps, just do a normal thing like playing with duplo without having to check my work email every five minutes or be on the phone to the plumber about the leaking bath, or rearranging a doctor’s appointment or wondering where the HMRC letter that looked important is.

I mean, I don’t need more time. I just need less shit and boring things to do, which take the shine off the fun stuff, like teaching a toddler to gurn.

But I am grumpy today. It might be because I haven’t slept through the night for well over a week. It might be because I have a broken foot which makes me look like I’m turning into a stormtrooper. This may account for my furious mood. I am raging, incandescent, ready to cascade from one moment of fury to another this evening like a demented snookerball . But it isn’t just being tired, really, really, really tired. So tired I’ve started to fantasise that John Lennon must have been a parent with a broken leg, a sick child and another with nightmares when he wrote his classic I’m So Tired, rather than a millionaire popstar on a retreat.

It is knowing I’m wasting my time worrying about something I know is already a load of baloney. Time spent thinking and talking about the bit of parenting people lie about even more than sleep. Lie to others, lie online, lie in books they write, lie to themselves. Move over mums whose toddlers who cry it out once and never stir before 7 AM ever again; step away those folks with newborns who ‘sleep right through’; make way for bullshitters to end all fucking bullshitters: the parents who find potty training easy. 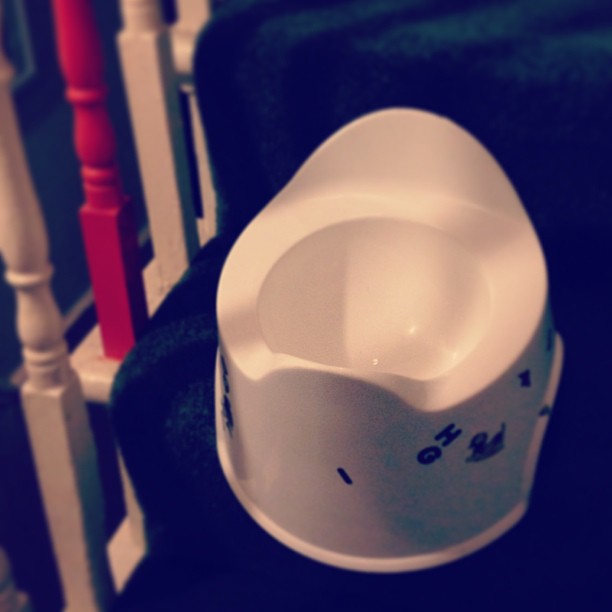 You know the ones. The ones who pretend merely having a potty around, making it normal is going to make it easy when you decide to introduce the hazard of defecation and puddles of piss to an already toy- and tantrum-strewn toddler landscape. The ones who assure you there is an optimum time to trip over a can of wee and kick it all over your socks.

I’ve waited and waited with my second one. Putting it off because, just like moving house, I can remember nothing but a mauve mist of fear about the period of potty-ing Spider-boy. My conclusion, finally trying again, is that it (advice re potty training, that is) is all bullshit. That buying ‘big boy pants’ and endless readings of ‘I want my potty’ are as useful as dream catchers and those snoring lion things which you buy when you think you are going to fall down dead from exhaustion about nine months in.

Big boy pants, for example, chosen with favourite characters just mean endless tantrums about who my son would prefer to piss on – ‘Not bob the builder I WANT MONSTERS’. He has no pants with proper monsters on, just some slightly dogeared Primark ones I bought because someone had fiddled with the packs and two of the pairs were orange, his then ‘favourite’.

I hate a stealth-boasting parent but waiting until son was old enough to talk about what he did and didn’t want or need to do in the little boy’s room has done nothing to improve potty training. It has simply given him the vocab to turn weaning off nappies into some Greek dialogue play. Potty training was awful enough last time, when I wasn’t working with a philosopher. One who could see me coming and was in the midst of the biggest hormone surge of his life, and the biggest bid for power.

‘We don’t wee on the kitchen chair’ I said, gamely, with only a hint of annoyance. ‘I JUST DID’ replied his nibs, looking at me with disdain. ‘You can’t just poo on the floor’ I say, trying to remain up beat. ‘YES I CAN’ he says staring at his moussey offering as it seeps into the floorboards. ‘Are you doing a poo or a trump?’ I ask today as he crouches down ominously in my office, and I combine working and parenting like the multi-skilling deamon that I am. ‘YES. YES IT IS A POO OR A TRUMP’ he shouts as if he’ll never meet a bigger moron.

I have no idea how it will end. I’m hopeful with pants before school, but consoled with the wry knowledge people can remain witty, and kind, and useful people even if they aren’t always in control, even when they are wet-knickered at 36. Mainly, for once, I’m hoping for shit luck.

But at least I know the answer to one crucial question. What is the one thing that would improve the quality of my life? My youngest son being able to tell the difference between a shit and a fart.

Well it would do for starters. Quality.