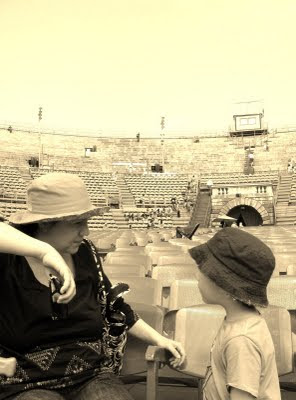 I’ve always been competitive. It is called the human race, after all. But blow me, can parenting be tough on the defensive. Draw your short swords. Pull on your helmet and sandals. It is all about combat round here. The better he can speak the more Spider-boy fights with us – wrestling with meanings and definitions, attacking boundaries, looking for inadequacies and finding energy to challenge everything.
This is exhausting, but with it comes a curious parallel development. The more able he is to draw swords, the bigger we begin to loom for him as God-like CREATORS OF ALL TRUTHS. We, the parents, are suddenly lifted up, the founts of all knowledge. We’re the best (or closest?) person to ask stuff, sure, but we’ve also become these pillars of certainty which contain his crazily changing world of knowledge. When we falter, without an answer, the whole world can come tumbling down and yet such relish can be taken when we nearly fall in battle.
Specifically, right now, we are in the land of the whys. It is a strange, sassy land, frequently lampooned and joked about. But even those aware of the stage, can’t be properly prepared for it or the prospect of being marooned here for some time.
One problem is, that for all my vanity, sometimes I don’t know the answer. (Blogger The Mule is on the same page as me when it comes to being far more comfortable answering questions about books and arty stuff than science and facts.)
Mostly though there is a subtle balance to knowing how far to allow the whys to escalate before you are in really quite sticky water indeed.

The trickier the question, the more complex the dance of telling the truth: how do you answer without prompting further increasingly impossible to sate probing? how do you avoid scorn or infuriation or derision if the ‘right’ answer doesn’t satisfy? and how do you navigate both these problems without totally extinguishing their flames of interest or giving complex or upsetting adult information.

I have very little advice for other sailors about to pull into this crazy port – apart from beware of getting over complex, that gets you nowhere. And even as a parent who doggedly tries to tell the direct truth, this often barely satisfies.
Somehow though, it is worth knowing that this isn’t a land without any charm. For one, it brings the philosophical and rhetorical so beautifully to life. ‘Why did I hurt myself?’ asks my tear streaked lamb after stumbling on the paving. ‘Why am I scared of dogs?’ he begs, unaware only he can know the full answer. ‘Why don’t we know all the people?’ he wonders struck by the size of the world. ‘Why don’t people who don’t know us like us?’ he ponders appalled by his possible insignificance in the face of the human race in all its size and complexity.
It also forms (another) useful lesson in shaving the shit and froth off being an overthinking adult. Take questions about the Romans prompted by our trip to Italy:
‘Why did they make mens (sic) fight lions?’ asks Spider-boy as he skips and climbs all over Verona’s enormous stadium.
‘Well…’ I venture (glaring at Thathusband for introducing the subject at all). ”There was no TV in those days, no cinema, people went out to arenas, theatres, like this, to watch ‘games’. And the games included fights, sometimes between people (men called gladiators) and sometimes between those men and animals. Sometimes the men were being punished for doing bad things, and they had to fight lions too’.
He ignores this as nonsense, indulging me in the way I indulge him when he has an attack of verbosity which isn’t quite to the point. He looks expectant and benevolent, like an experienced Deputy Head asking infants about Jesus and getting answers about Power Rangers.
‘But why?’ he repeats.
A hundred forgotten RE lessons, and the name ‘Daniel’ come up for air but retreat and drown again in my addled memory.
‘Well things were different then. And the men were being tested or punished – like told off, but um, worse. And it was, well, exciting to see them fighting with the animals’. I’ve cracked it, I imagine. ‘It was exciting’ I repeat, ‘the men wanted see the gladiators and prisoners fight the lions because it was exciting!’
Another glare, and then he mimics the look, that look, the ‘stop messing around now or there will be consequences‘ look. ‘But WHY?’ he thunders. We’re on the brink of Armageddon.
I take a breath and allow my mind to go blank. I think about the question. I hope the Colosseum here won’t tumble if I let succinct instinct take over.
‘They made the mens fight lions because…’ (deep breaths). ‘They wanted to see who would win’.
He smiles and scampers back up towards the top of the outer edge without looking back at me, crutch in hand, relieved in the blistering sun. He’s briefly sated with this grisly idea, I can tell, but he’s also looking round for the next conundrum. He squeezes something tight in his pocket. I think back to the negotiations on leaving the flat this morning and remember. It is a teeny plastic model lion. I have no idea who is winning.

One Reply to “On your marks: The human race”