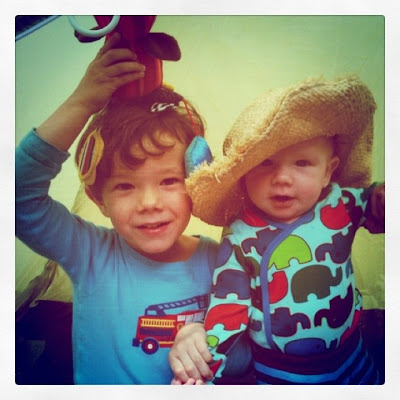 Above is an ‘instagram’ photo. A snap my husband took (and made?) with his i-phone app which allows you to play with the saturation of your digital photos, and give them a particular dated look. Smarter media analysts and philosophers of the everyday than I can debate how this speaks to a current oxymoron obsession with instantaneous nostalgia in the proper hifaluting terms.
But even I can see some of the reasons the glowing play of lights on these digital shots particularly appeals to my generation. For us, who remember using phone boxes and taking our holiday snaps to Boots to be developed, see in this look a familiarity, the familiarity associated with snaps which sat in perspex frames, on top of our parents’ (remote-less) television sets, getting tinged and singed and faded by the afternoon sun, for many years. And because of this visual echo the pictures and the associated memory seem immediately transformed and given ‘treasured’ status.
‘Instagram’ adds years to the informal and easy moments captured on our phones. It brings our past into our present and reimages our digital records into artworks of fragile fadedness, replicants of family shots taken on cheap Kodak cameras with a wind on film and a four use flash bulb. The aesthetic appeal is emotional. The best of our childhood pictures and those of the generation before were somehow more special as there was such a huge element of luck in their creation. Family photos were such a lottery then. Sometimes months would pass before you knew what had been captured beautifully and what posed joke, group shot or gorgeous view was reduced to a smeared mass of nothing, a blinky mess or a never reachable image forever obscured by your Mum’s thumb.
Is it a good thing? Imbuing what has just happened with the status of something loved for a long time? I’m not sure. There’s definitely something in the craze for this sort of photographic trickery which links in with a need for immediate gratification, and reflects the strangeness of our socially networked over plugged in world which searches for an elusive ‘authentic’ and sees it only when the real is enhanced.
But we can be over serious about things which make us happy. And I like the snap up there. Parenting has taught me that life hurtles along very fast. Depression is powerful because it blurs and fucks around with time, leaving those in the pits hankering after time which has not only gone but is marching on rhythmically, without them. In this blog I’ve tried to explore the first year of Newborn’s life, and learn what I can from thinking about that alongside my previous path of motherhood which was clouded by serious depression. Immediately I found myself preoccupied with clutching at memories and hoping enough of them will stick.
I hope I’ll always remember the joy of chilling today when we read and ate and laughed and got chocolatey this Easter Sunday, a family of four, three lads and one girl still in our pyjamas, laughing on the lawn until early in the afternoon. And because I already feel nostalgic about it, I like to hope that this likeness of my boys larking around with hats under canvas in a little green tent at the end of my garden will be floating around in my memory somewhere anyway, whatever colour way or resolution is used to record or tamper with it. I’m old and wise enough to know though, that sometimes memories drift away or are replaced, so it is nice to have a reminder. Especially one where my boys look so very similar and adorable.
People keep saying to me that any minute now we’ll lose the sun. These brighter than bright, washing drying, baby dazzling days will not last and we’ll be left with a sodden, dimly lit Summer – miserable and chilly rather than gloriously chilled out.
I’m no weather woman, and have no affinity with the earth or the elements: my flowers only grow by luck; my lawn is a disgrace despite affectionate grooming. I hope they are wrong though. But even if they are right? This super bright Spring will surely not fade too much in my memory.