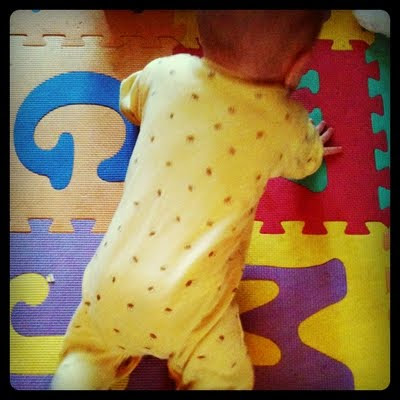 So newborn is on the move. He’s off, crawling like a pro. Properly, on all fours, moving forwards and backwards and to the side. My jersey-clad crab, edging round the lounge. That he’s moving isn’t a surprise. Not because I expect my children to be precocious, but because the blessed scamp has been crawling in his sleep for the last two weeks.

Or at least, he’s been flipping over, raising to all fours and keening in his sleep. To accompany the keening and rocking with eyes screwed shut, his nose droning in a snorelike rasp he intermittently screams. I had thought this merely an extension of his tortured (and torturous) obsession with making sure I’m always half-awake to protect him from nocturnal predators. He did the same with sitting up. Manoeuvring over, fast asleep, then shrieking, still asleep, as he couldn’t get back down.

What is a surprise to me is that this midnight, still-asleep anguish is replicated exactly when he’s awake. That he really is desperately sad about moving. It is total and beyond heartbreaking. I’d hoped crawling would cheer him up and help him out of a current clingy phase. That having his own momentum would enable him to let go of me, a little, and stop getting so upset and snarky when I put him down. To explore, and maybe in time revel, in his own new autonomy. To find his feet, whilst finding his knees and elbows, But no. He’s so distraught. He wails and cries and builds up to a pitch of furious fearful sobbing with every centimetre he edges along.
I’m trying to fathom it. His distress. Is he scared of the world? Frightened by the prospect of being under his own steam? I’ve been glib, a little, about our love affair coming to an end but maybe it is harder for him than for me, leaving it behind.
Food for thought, the problem of independence. And a comment on how what we see in something – the exciting milestone of crawling – may not be perceived in the same way by our children. What we read as an amazing new chapter, for Newborn, is perhaps the start of the longest goodbye. Maybe he thinks it is too early to be leaving babyhood so emphatically. Or maybe he’s just scared of the playmat. Who knows?