My 6 year old son is more sentimental about the past than his Great Grandmother who was born in 1920.

And yet… he combines this nostalgia (for when he was a small boy, that day when I let him have 3 polos, the time he found a stick in the park, the birthday party three years ago on Hampstead Heath where he had to do a poo on a party plate because there was no toilet nearby) with such a ruthlessness.

Take TV. Fireman Sam, poor old Fireman Sam with his simple, manly heroism and simple tales of being a good sport – he’s rubbish now, Elvis doesn’t even raise a smile. All those hours spent in front of In The Night Garden and Tinga Tinga, now dismissed as wasted. They are ‘nothing’ and ‘for babies’. I point out he liked them then – he replies, wistful about my endearing idiocy rather than his past, he didn’t know what he could like because he hadn’t seen Horrible Histories yet. Some things remain, we revisit horrible Histories from time to time, but we have emigrated to popcorn proper kidz TV.

Worst though buses are now officially, completely and forever just not all that. They aren’t even shit (like Fireman Sam). They are just, you know, buses. The winning seat above the driver, that still matters, and newborn (now 3.5) and he vie for the best seats in the house, but all the Ferver is gone.

For those who don’t know me, I wasted hours, days, months of my life looking at buses. I went to bus museums, became a member of the Transport Museum. I frequented greasy cafe after greasy cafe drinking wartime tea to sit and watch the 144s move off majestically in the rain. We had one of our worst journeys ever on Christmas Day 2009 in the car when it became apparent that apart from the four double deckers standing proud on the Muswell Hill roundabout stop there are no buses on Christmas Day. He cried all the way from N8 to Loughborough.

Mr Thatwoman once took him to the Isle of Wight bus museum open day. Spider-boy took his best mate (more of a train man himself) and got his dad to ring me from the pier to say ‘There are so many buses mummy and they are ALL OLD’. They were both pretty discerning, and though forgiving of the different colours of buses from the war and other areas of the country, clear that proper buses are red (and double deckers). Which meant they were positively gleeful (and slightly condescending) to the queues of grown up IOW bus fanatics purring enthusiastically over a vintage London bus. ‘We see buses like that everyday’ he told one gentleman with the pearl cheeked wisdom of a true toddler sage.

When I was pregnant with newborn, a kind friend C took Spider-boy out with her while I had a scan. The scan, though thankfully fine, was much longer and more fraught than expected. Stuck on Tottenham Court Road, having gone on a date with him, eaten pizza and run out of chocolate buttons and bubbles she resorted to her last ditch plan (a final plan filled with great insight, resourcefulness and imagination I might add). She just took him to a bus stop. At that point he had reached his high point of obsession. Not yet four he could name most bus routes that went from North London into the centre. He used to quiz (and judge) adults on whether they understood the route of the 41 or 29. At the bus stop he asked which bus they were taking.

‘You choose’ she replied.

His mind is still boggled, I’m not even sure he could handle the choice now and then he was stumped: so used to being thrown on to whichever bus had space by a harassed parent late for something, he’d never been given such power or responsibility.

‘Okay, let’s just get on the next one which comes, whichever one it is’ she soothed. And so they did. Just got on, marched to the top seat made of win, and ‘drove’ to Kentish Town. And then, in the stroke of genius from Friend C, they just got off and got on another, fairly happily trundling up and down a section of the city for another hour.

I tell that, merely to present one of the happiest days of his life; his passion was simple and true and specific, as all the most honourable passions should be.

And he had a collector’s eye for specifics. It wasn’t just the bus number he wanted to remember and discuss, Oh No. IT WAS THE ADVERT ON THE BACK which was the way he decided how to rank his spots. And there was only one advert that would do: The Lion King. Nursery staff who he has long since left behind still tell me about the days where he would stand by the window on tip toes waiting for a lion all through lunchtime. They eventually printed out a copy of the poster, so he could hold it tight and be persuaded to come and eat with the other children.

It was a fever, an obsession, and it was infectious. I became both addled with nerves and throbbing with joy, depending on what the back of a bus looked like. The worst, of course, were buses with nothing on. Then there were those with ‘just a lady’ (Mamma Mia!), ‘horse’ (War Horse), ‘just writing’ (several productions which dared to only show their title).

Husband and I started to live in fear that The Lion King would end its run, and we’d be damned to standing at the bottom of Turnpike Lane in the rain and mist for all eternity. How I cursed that fucking lion, intoxicatingly beautiful though his abstract design maybe.

And then one day, 2.5 years after it started, it stopped. A lion went past, and he didn’t say anything. He smiled, benignly, not unkindly, but with something like sympathy, when I said: ‘Yay LION’ and went to high five him. Buses drifted off into the distance. He sometimes notes they are quite cool, and the best vehicle, but he’s given half of his collection to his brother already, and re-utilised the others as enclosures in a zoo and props in gross out magic shows.

I on the other hand am left bemused and bereft. I sometimes forgive myself and point out a bus on the horizon. I tell him titbits – ‘I saw a ghost bus today’ I enthuse after seeing a learner driver one morning, and am greeted with gentle repetitious reprimands:

‘Did you forget? Did you not remember that I don’t like buses any more’.

His knowledge of the bus routes has faded, he’s no longer bothered and more concerned to learn which Big cats can’t roar or why some jokes are funny. But I still can’t shake it, and feel slightly perturbed that newborn likes fire engines and making up rock songs. My son’s easy transition is not so for me. Don’t get me wrong, I’m no busspotter, but I was so immersed in that which gave him joy, that I feel oddly bereft. It was a sad day, and a salutary reminder that I’ll always be playing catch up. 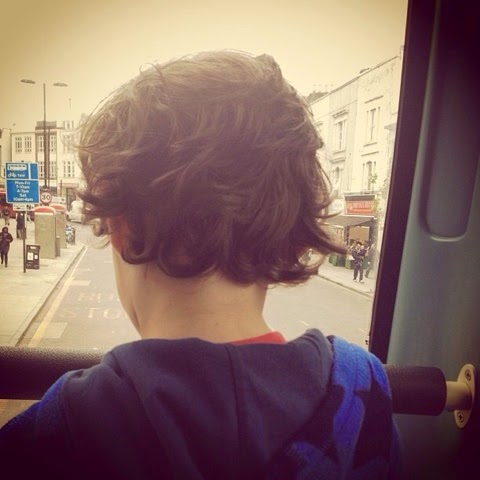 Always one step behind. Today he went with his father to the zoo. Big cats have been replaced with horrific insects and arachnids. Fodder for pranks and playground boasting. It makes me feel terrible for all the times as a youth I poured scorn on adults trying to be ‘in with the kids’. For sure some are pretending they aren’t ageing, which is self-deluding and therefore futile and boring for others. But some? I think they are just trying to enjoy the easy rapour and shared enthusiasm, the vital interest and fun that you can experience with the young.

The very young are incapable of hiding their love, their one track mind obsessions with things. They are often bores on their favourite subject and yet the brutal sincerity of their early love, is something I can only envy as I scrabble to keep up, and mourn with fitful transport nostalgia.