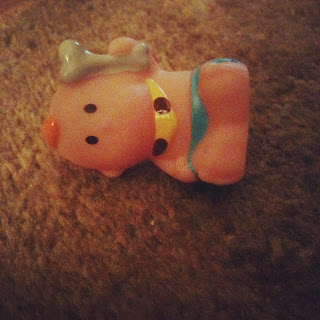 Newborn is still teasing us with whether his sounds are words. Don’t get me wrong, he has means of communication. He has his vigorous shouting and pointing, an ability to vote with his feet and either stomp off (from any situation he dislikes) or stand up (in his high-chair and change the dynamics of mealtimes). And his keen penchant for throwing things (in temper or exuberance) or screaming at will is serving him well in getting what he wants. But I feel on the end of a long game, as he articulates on occasion as if to tease me and sound me out.

It is hard to tell if all his momentary flashes – boo, ball, yum, look, NO, Spider-boy, more, yeah – prove his understanding and ability or are merely echoes of what he hears, tongue experiments sent to try us. Some are real. His mummy, daddy, bye bye, uh-oh and hiya have been clear enough for a while, said in context, obviously meant. But his new word, baby, is far more problematic. I’ve noted before this was Spider-boy’s first word, said brightly and proudly to his own reflection.

I was so excited when Spider-boy first spoke, not least because of the amazing moment where we realised the hidden obvious. The sound of that first word was the first time we heard his voice. A voice we’d learn to love. One that would question, whine, tempt, affirm, joke, cajole, comfort all foreshadowed by those first two syllables.

Newborn of course says it differently. His voice has a different sound*: more sputtery, underscored with a squeak of excitement and weeziness, not least as he is always on the move. He says baby to the mirror, but is also pointing at his belly, and then the glass as if he’s having a moment of pure cognition and doubt at the same time – which is which? who is leading who? which is the ‘baby’. He’s the same with photos. Finger smudging images of himself and his brother, and roaring with laughter at the strangeness of a him which is not him, and the witchcraft of the reflection allowing him to play with his body and his image.

He also uses it for dollies too, especially plastic dollies which are newborn looking with wrinkles and ‘bits’. At an appointment with a sleep psychologist he insisted (by pointing and shouting ‘Uh’ and discarding anything else offered) on two dolls. I’ve seen him point at dolls before, and, of course, bite and throw them adding them to his plastic arsenal of Megablocs and balls. But as the session started he did something new: he carried them across the appointment room to a sofa and lay them down, as if putting them to bed. Sensing the enchantment spilling from me and the health professional at this precocious display he patted them, smiled and stood back, before grabbing both babies and smashing them in to the floor.

He ferociously set to on these anatomically correct ‘behbehs’ so fast I started flustering out loud and blurted:

‘We’ve never hit him. We don’t hit him. However annoying he is when he doesn’t sleep we don’t do that. I’ve never seen him do that. HE’S NEVER DONE THAT BEFORE’.

I mean seriously, he’s chewed quite forcefully on his Happyland caveman baby but never gone into attack mode. I mention the incident though, not just to show that like his brother he’s happy to humiliate me, but because it fascinates me that he’s wrestling with something his brother was so comfortable with – his identity as a baby and his transition away from that to something older and more capable and no longer nearly so scrawny and scrunched up. Is this what happens when you are at the bottom of the family tree, the youngest and possibly, probably, the last baby in your house?

Perhaps I’m being a deluded and scantily read old Freudian but it fills me with questions (and slightly uncomfortable answers) about how and why he is embracing and rejecting his infant self.

Does he sense that he may always be the baby, however much he grows, and resent it?

Can he tell I’d like another baby but I probably won’t have one and sense the babying of him, for his entire life, which could come from that?

Has he guessed that for Mr Thatwoman and I any other child is at best a hint or wisp of a family life we once imagined but probably won’t engage with?

We’ve bought him two dollies so he can act it out for himself.

*another surprise for us demonstrating the terrible pitfalls of second time parenting: assuming always the second follows the first is a rookie error, why would he have the same voice?