My favourite parenting nightmare is when a simple conversation with a toddler is revealed later to have a different, often diametrically opposite meaning to each participant. Or indeed when many conversations appear to have been at cross purposes. Such as in February when we realised the toddler thought that the word for the ladder on his brother’s bunk bed was ‘NOCLIMBING’.

Having sagely discussed the ‘no climbing’ policy for two weeks we were both happy and confident of our chats. Me thinking we’d finally established a house rule he understood, the tiny dictator mildly amused that I kept showing him how to heave himself into his brother’s forbidden top bunk, even giving him a nice new word for the means of getting there.

We had an arty weekend, one of fun and learning. My strongest learning was you can only do so much stuff with kids on a bank holiday, something I know really but always fail to heed in my attempts to make any family time jam packed with fun. That, and that buying a load of cheap canvasses and throwing paint around the garden a la Jackson Pollock is more cool than almost anything else you can do with your best friends. 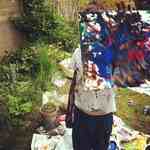 In preparation for our action painting we went to the TATE to see some real life pictures on walls. That husband and I split, he taking the eldest to see Roy Lichtenstein (Spider-boy liked the explosions and the nudes) and me schlepping younger round Ellen Gallagher’s exhibition AxME. He liked her pictures and collages, especially the ones which involved playdough, pictures cut out of magazines, face doodles and lots of yellow paint: these are his mixed media of choice too.

Mostly though, he wanted to touch them. I can’t blame him, not least because most adults get a glint in their eye near the really massive pictures which look so rough, and huge and kind of touchable. You can tell if no one was looking most people would cop a feel of the Mona Lisa.

He’s faster than roadrunner and as bossy as Napoleon though, so I had my work cut out. I began a tortured Joyce Grenfell monologue about standing back, looking, pointing, appreciating, liking, talking about but NOT TOUCHING, and a physical routine of manoeuvring and scooping up out of the way. He was unimpressed and grabby.

He clarified in case I didn’t understand his requests: ‘LOOK mummy, play dough! I touch?’ I point at a guard rail and say ‘Look, the wire is there to stop us touching the pictures’. Son inspects the small wire frame protecting the sacred foot of floor beneath the biggest most touchable ones. A problem he can solve: ‘I noclimb over it?’ he offers.

I have him up in my arms before both hands have gripped the wire but an assistant has seen us. Son and I freeze, already chastened. I explain I wouldn’t let my son touch the actual picture or win the argument, and that I’m hoping this painful display will pave the way for easier gallery visits in the future.

The assistant looks slightly suspicious of me but tries his best children’s TV presenter voice for the child. ‘We don’t touch these’ he says.

Toddler narrowed his eyes. ‘Not that one?’ he says, pointing at the one furthest from us. ‘No’ says the assistant with great clarity. ‘No touch that little one?’ bargains the kid gesturing nonchalantly at the least impressive. Negative agrees the assistant. Son nods to himself and points out some more, 6 more in fact in the same request/denial mode. He pauses, isolating the biggest picture without a cordon: ‘This one?’ he suggests. ‘None of the pictures’ says the guard, with authority.

Bloody hell I think. I’ll invite this guy over for tea. He can teach them to wash their hands and not throw their cereal. Son breaks into a broad grin and then with perfectly clipped, loud sarcasm sighs at the guard:

‘My touch your chair?’ he asks and then shakes his head and strides out of the room laughing. His conviction the guy is a lunatic who can’t share his toys is as clear as his rueful giggle. I grab his hand and we walk into the next room, with a 40 foot installation of what looks like a climbing frame and no assistant visible. ‘Mummy’ he says, knowing we’re on the same page: ‘We touch this one’.