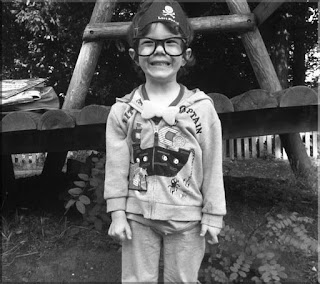 Last week, in a mad dash to get to school on time (among many other pretentious goals I’ve set myself I’m now grappling with the task of being a new person, an ‘on time’ person, when it comes to school), we got our timings wrong. So wrong that we arrived to the unpopulated playground. I heard a quiver in my son’s voice as we surveyed the empty tarmac.

‘Are we late again Mummy?’ he asked fearful of the inevitable. ‘But we didn’t want to be late, did we?’

And then I realised. We were early. A pair of Mirandas, or, more correctly, travellers to her strange new, brave new world. Trespassers in the zombie playground: empty, unscuffed and new. We were the first two people at school.

This was great, not only as part of the steep learning curve surrounding school days for both of us, an arrow in our school quiver and a tick on my internal spreadsheet of things the way I want them to be, but also because we had our pick of where to play. The painted out grid for ‘What’s the time Mr Wolf’? The slide with the tempting bar to roll over for a speedier decline? The relic from the 1990s a dangerous and thrilling twist of primary coloured metal for hanging from?

Son elected the pirate ship, so we set sail. He stood on the bow and stared over the safety play surface ocean and said:

‘I’ve been driving ships for aboot twenty year, so Ah nooo what Ah-m talkin aboot. Wha-tch an learn bairns, wha-tch and learn‘ before throwing himself out of sight.

The pratfall was perfect and just before I my laughter rang out, he popped his head above the ship and added ‘Champ-yun!‘.

The reference, for those without four year olds, was Keith Fit, from Justin Fletcher’s tour de force kids’ TV show Gigglebiz. The show is simple and knowing, old-fashioned but not twee. It is a sketch show interspersed with ‘your Giggles’, or jokes from kids who often fluff their lines but enthusiastically share their cracker jokes and silliness with the jovial host.

Like a pickpocket on a tourbus through the history of TV comedy, Fletcher and his writers have snaffled and pinched, reinvented, refreshed and in some cases, dare I say it, improved on the laughter of the past. It is The Two Ronnies here, Morecambe and Wise there, snatches of Harry Enfield, the best and cleanest of Little Britain, with characters Paul Whitehouse would have killed for. And then, for good measure some classic joke ideas personified – Doctor Doctor, for example, who is chapters from the The Ha Ha Bonk Joke Book brought to life, or  Nanna Knickerbocker and The Lost Pirate, children’s pantomime staples forced to navigate their way through mundane situations like eye tests, and changing light bulbs and getting lost in Brent Cross.

In our house we regularly have to list our favourites. After connoisseur’s choice King Flannel, a bandy legged monarch who speaks in mumbles and is in a never ending quest to get one up on his bossy butler, my favourites (unsurprisingly) lie in the pun-makers. I heart Dina Lady, a cook who creates uneatable dinners by ignoring language nuance, rock cakes with rubble, yule logs with twigs and chocolate sauce, at her best a full size chocolate moose, all to the increasing despair of Tommy Tummy her sidekick who she publicly characterises as nice but silly. And look forward each evening to Arthur Sleep, a local newsman so perfect in look and cadence to the newsreaders of my youth, complete with brown telephone, twirly chair and mug of coffee by his papers, a line in self-congratulatory jokes and disparaging attitude to his roving reporter and weathergirl Gale Force, he has twice reduced me to tears.

And as a media studies type, the meta levels of Farm Dung, ostensibly a country man with an appreciation of good word play, astound me as much as they tickle my son. For the real joke is on the RP voice over, the city dwelling documentarian who is always asking stupid and inane questions and repeating his views back to him as if she knows better.  Like when he says he has something adorable in his farmyard.

‘Are you going to show us something adorable Farmer Dung, something cute, like a rabbit?’ she gushes, all condescension as sickly and thick as condensed milk.

‘Yea’ he says, fixed camera pose, smiling with discomfort. He looks behind at the barn. ‘See?’ he profers to confusion off screen. He stares, bemused and opens the top of the barn door to reveal a bull. ‘SEE. A door. A bull.’ And then, as she doesn’t take it in, pisses himself laughing with his sidekick and best friend Reggie.

But Keith Fit, a fat and breathless Geordie PE teacher, an ever-expert, who’s done everything for ‘twenty year’ and who cheats to show off to youngster has the winning streak when it comes to physical humour. His catchphrases are as good as anything the Fast Show ever managed, but his real charm is playing up to exactly what you want him to do – mess up his demonstration and get his for bragging – and then top it with an unstoppable, inevitable falling over gag approached with grim determination by the chameleon performer Justin (who seems genuinely endangered). Slapstick, after all, is at its funniest when it looks like it hurts. And his secret? Like Spider-boy’s, the comedy is in the timing.

One Reply to “Comic Timing”

Leave a Reply to Muddling Along Cancel reply