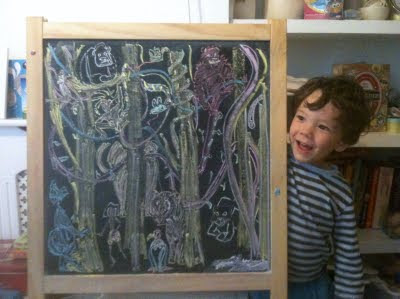 I often think that what I love most about children is their brutality. A searingly honest take on life, unsullied by any social expectations. My little sisters used to cry and protest when our mother sang them (tuneless but enthusiastic) lullabies. Last weekend I saw my best friend’s glorious meringues dismissed as ‘disgusting’ by her first-born. A friend says his son tells him to stop ‘that noise’ when he whistles. Sharper than a serpent’s tooth, a child’s ingratitude. We all have stories, which is why Lear’s lament rings true.
But how bewilderingly brilliant his compliments?
We’re going through a major animal phase in thathouse. I’ve drawn him a picture on his chalkboard. The demands are endless and what started as some trees with a snake and a little Baloo and Mowgli dancing in the corner is now an epic chalky jungle.
He wants to know why I like Mowgli better than Tarzan, and I find it hard to articulate without sounding gooey. My strong feelings for that man cub is not to do with the cartoon’s now iconic status, its classic take on ’60s music. Or even its charmed and charming combination of baritones and basses and knowing humour (as compared to the literal translation of Phil Collins in the otherwise exciting enough Tarzan adaptation).
For me, Mowgli is better than Tarzan because it is clear in every single frame of Disney’s The Jungle Book that whomever drew Mowgli did so after first knowing a little boy and loving him very much indeed. The curve of Mowgli’s back, his springing step, his luminous long limbs, the flash of emotions betrayed by the start of a laugh in his eyes and that boyish nose. The details take my breath away as they draw me in because they feel so really and truly imbued with ‘loving-a-little-boy-ness’. I never do them justice in my copies, but I love that the inspiration is there all the same.
Anyhow I’m no Disney artist and I’m slightly embarrassed by my scraggy chalking menagerie, and their abstract scribbly look. I’d love it to echo Quentin Blake, or at least my Grandpa, but sadly it does neither, quite. Initially, Spider-boy joins in with suggestions for what could be improved. The snake could curl round the vines more symmetrically. There should be bigger ears on the elephant marching away through the brush. The tiger needs more stripes, and there isn’t a monkey. And really, actually Mummy, the picture needs a crocodile, but he would need a river.
I sigh, and almost whine a bit. My Mummy Goddess is deflated and sagging. She’s going to fly around the room whistling if it is revealed that I’m really (no, really) not very good at drawing crocodiles. And this would be a shame, as all the caveats above can’t hide my new-found enthusiasm for chalk (and the leeway all that smudginess and scraping gives a struggling scribbler). Then something momentous happens. My chatterbox three-year-old takes a beat. Just a short one. He monitors the mood and says:
‘I think you are good at drawing. I think you’re a brilliant draw-er’.
I don’t correct the punctuation, I’m too busy melting. As the final bits of me seep into a puddle, he adds, with all a child’s simple gratitude: ‘We need another snake though’.

One Reply to “Blackboard Jungle”