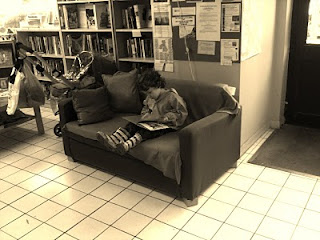 I posted a couple of weeks ago about libraries, and my fearful sense of a future without them. Especially without them in remote or unpopular places. I’m still shuddering. I fear this may look funny, but the bookworm in me has been drawn out of the earth again, as my local book store has started a valiant fight for survival in these wintery economic climes. But Tim assures me there’s no conflict of interest and libraries are good for bookshops, encouraging a future of readers and interest in each other.

Tim works at The Big Green Bookshop. It is my local bookshop, an independent set up by two rogue heroes. Spider-boy calls them guitar man and the other man. Go and visit and see if you can tell who is who.
It would be easiest to tell on a Friday morning when their usually both about reading books and singing songs with N22’s (and N8, and N17, and N15, and even N4s who are prepared to walk) under fives. There’s free coffee for Mums, enthusiastic strumming which indulges local variations on classics like row-row-row your boat and tolerance for the kids’ excited pre-empting of the bear’s entrance in We’re Going On A Bear Hunt. And most charmingly there is no hard sell, no grumpiness about buggies, no worries about kids who want to look around the shelves between songs. Perhaps that’s a problem, the lack of hard sell I mean, you have to hunt out the collection box to contribute for tea with more perseverance than Rosen’s ursine seeking family adventurers.

Simon and Tim are smart because they know books and people. They understand and saw a need (and huge desire) for Wood Green to have its own bookshop after the large Waterstones shut down a few years ago. We may be in the heart of Harringay but for now Wood Green has a thriving massive library and lots of community stuff going on. Despite Harringay’s shit poor media rep which suggests we’re some gun ridden shoplifting social services no go zone, living here is generally quite nice. And TBGBS embraces that.
They told the story in their blog OPEN A BOOKSHOP, WHAT COULD POSSIBLY GO WRONG (TWO BLOKES, ONE BOOKSHOP, NO IDEA). It is typically fun and open and honest. Like their website with its exuberant reviews. John Hegley’s Glad To Wear Glasses is reviewed thus:

This is John Hegley’s first and probably best known collection of poems, and frankly, it’s brilliant. There are a lot of poems about glasses and one about a brown paper bag. He has an ability to make the everyday something special, and for that alone he should be carried around North London being cheered and waved at as he goes. Sadly this hasn’t happened yet to my knowledge.

I wanted to blog as I admire them hugely. Not least as things are tough and they had the balls to admit it. To email their customers and explain that they were open and wanted to keep it that way. To say they were struggling and to ask for help. They did it with their usual honesty and wit – they have a struggleometer on their newsletter, Blue Peter appeal stylee, to show how far they’ve come. It’s so retro it is almost achingly cool. It isn’t about cool though, it is about survival and frankly, I bloody hope it works. Because I feel about them, much like they feel about John Hegley.

I felt like crying when I heard the shop might not survive. I could blog for ages about all the wonderful memories I have associated with it. Newborn’s first book bought with a thorough analysis of which ‘That’s Not My…’ title would be best. Their indulgence of a hopping Spider-boy in letting him use the staff loo. The day Tim went through all the kids’ shelves looking for one with a bus in that would satisfy Spider-boy’s obsession. The scathing but tolerant look Simon gave me when I went through my shameful Twilight phase and asked where the third book was on the shelves. ‘You’re looking in adults’ he said. ‘It is for teens’. Both of their excitable reviews of any book you mention and their gossip about their book group. Perhaps my fondest though is for a day when I arrived 10 minutes after closing. Rather than turning away a harassed Mum Tim invited me in, after hours, and offered a glass of white and a raucous chatter. You don’t get that on Amazon.

I could tell you all this, but actually, it is the kind of hang out book loving place you have to discover yourself. So get it while it is hot. I’m sure you’ll like it.