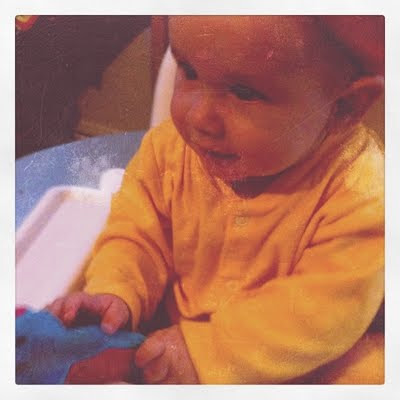 The end of the world is on its way. Newborn has worked out his favourite thing in all the world. Beating Sophie, his brother and I on the list is standing. Standing and stamping (whilst clinging to a grown up finger) and being able, all of a sudden, to pick things up, stuff them in his mouth and then hurl them across the floor. Sitting, only learned a few days ago, is officially passée in the face of possible movement too. All activity is now accompanied by a steady monologue of bites, clicks, grumpy raspberries, gurgles, grunts and screams.
I am so excited by this new him, but immediately nostalgic for what is drifting off. I love babies. I think they are so ace. I like them when they are teeny and birdlike and scrawny, curled up just after they’ve popped out. I like their reaching hands as they get a grip on the world, I like their round big heads, their changing eyes, their dribbly mouths and their itsy toes, even and especially when they are purple-tinged in cold weather.
I think they are fascinating even in their half-awake newborn daze. I don’t even mind them when they cry. Bookblogger of the moment @meandmybigmouth once held Newborn for me at a party in my local bookshop (I did tell you they were cool). Newborn was hollering. Big Mouth happily held him anyway saying he didn’t mind crying babies, after all, it is their only form of expression. I agree. It is pure, too, the expression. Another reason even tiny ones are awesome – they only give shit, they won’t take it, and don’t fanny around the point if they are annoyed or need something, regardless of the social situation.
Like humans, only smaller, they seize the day and punch it in its complacent face with new interpretations of the world all around and, failing that, with direct desires acted out in the hope someone will understand what they want, like and need. Good old babies. Lashing out with the compromised insistence of drunks and the subtlety of bad mimes.
But though I could wax and wane lyrical over the usual suspects – their look, their inquiry, the amazing connection they make when they laugh. And I am occasionally dizzied by the realisation that these are probably the best days of my life, days where despite any other stuff going on, regardless of my mental state and ability to realise it, I am beyond lucky and thoroughly bathed in blessings. Though all that is true today I am reminded me of a different reason: I love babies because am a total narcissist.
I loved Spider-boy because he had meteoric impact on my world. He shattered it but scrunched it back together while it was still loose dry powdered earth. He rebuilt planet me into a rock for him to stand on. I also loved him because he was super-cool, hilarious and showed me so many of the errors of my ways. I still feel enthralled by his force, even in its nastiest guises: spite, lying, temper. I marginally less inclined to like his whining, but even then, in the longest whingiest afternoons I know I’m not far from the privilege of a new look, or joke, or question about what animals eat lions.

With Newborn there is something else. Above is a picture of Newborn through ‘1977’ instagram filter. Damn, there is so much more to be said about instagram and how perfectly the instantaneously processed copycat shot works to press my narcissistic buttons. For now, be assured, it creates a baby doppelgänger. Spider-boy was the image of his Father and my mother in law. Neither of my sons is more precious, of course, my heart extends around both of them, but I definitely get a kick of how Newborn looks like me.

It is a strange sensation, seeing yourself. Not least as sometimes it catches me at the most inopportune moments, those when perhaps I should be bored of my son or slightly resentful. Like when he yanks my hair or bites my shoulder, has a pre-cursor to a tantrum because he can’t. quite. crawl. And this is greeted with lashing out at my face as it is ALL my fault.
I’m lucky, lucky, lucky as Lola though, the resemblance is in the nose and cheeks, and radiates from his face when he smiles. Especially when he smiles at me, whilst looking into my eyes. That’s another thing that’s great about babies, they share the love – an unwavering gaze accompanies their wide mouthed grins as they hold your attention to make sure you are clear, yes, they are smiling at you.
Today we’ve spent several very productive few minute bursts where I have clapped and tapped the the high chair (my wedding ring reverberating around the kitchen as if I have special powers over the universe). Both greeted with screams of delight. He thinks I am a fucking genius. His brain explodes and he pounds the table with ape-like excitement when I click my fingers and can’t control himself when, bursting with the reciprocated joy, I belt out Size of a Cow because I’m so caught up in the moment I can’t control myself either.
To be sure the moment lasts a while I have hidden the tea-towels.

2 Replies to “Are you looking at me?”