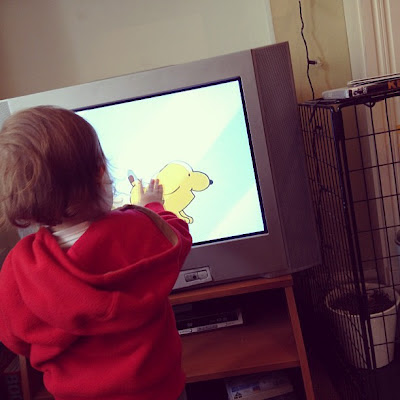 I’ve written before about Spider-boy’s attachments and obsessions when it comes to TV, notably his hearty love for Fireman Sam and later Gigglebiz, which have now also been consigned to the scrap yard for all things too babyish. He is now, with typical four-year-old full immersion, hooked on Horrible Histories and Deadly 60.

I think both are a good thing, and mercifully, just like listening to more complicated stories at bedtime I feel they are giving him something I simply cannot – a sense of autonomy and mastery over his own taste. Like the best TV for anyone they entertain and challenge, inform and explain, provoke thought and reactions. Only Deadly 60‘s charming presenter Steve could get away with throwing down the gauntlet to kids armed with Top Trumps predator packs by wickedly suggesting the natural genius of a Praying Mantis or a Venus Flytrap could be considered on a par with the might of a tiger. Spider-boy loves these ratings and top tens, the enthusiasm Steve has for the natural world and the hint he like his idol, should spend time thinking carefully about whether a honey badger could take a wolverine in a fight (it so could).

And only Horrible Histories would have the balls to introduce the notion that history takes many forms, can be misunderstood and patronised, whilst also told from different perspectives, in a show which is instantly appealing and hilarious to preschoolers (not least for the focus on poo and all the uses made of it over time – dental cures, analysis of ability to rule through sniffingroyal stools, the houses build of pigshit).

The later is especially involving – go on any parenting forum and you are bound to find a thread talking about mum crushes on the guy who plays Charles II or the joy of rhyming ‘imagine it’ and ‘I am the last Plantagenet’ in Richard III’s mournful lament for a reputation ruined by Shakespeare. You’ll hear of grown women sniffling into the fish fingers at teatime when they think about the pathos and distress of Queen Victoria’s anthem to lost love:

Try it yourself. Children or no, make your own day by looking up the hieroglyphics number (A-B-C re imagined as ‘eye foot basket’). And hear a fizz of pleasure from any human being who appreciates life and wit, with the RAF Battle of Britain boy band song. A tale of 10 hours training, Czechs, Poles and Brits fighting together, the strangeness of become history’s ‘few’ and the desire to be back for good (like Robbie).

And good TV, like all good art, does that – unites, appals, invigorates, prompts more. With all things parenting the temptation is to help our children skip the steps towards finding the good stuff in life: help them miss our mistakes, to avoid the rubbish on the way. Which leads me to Ben 10, which to be fair, isn’t the worst TV show ever, just not especially inspiring in any area other than the endemic marketing to little boys.

For over a year the spectre of Ben 10 has hovered around our remote control, always a fascination, a temptation, eventually a Holy Grail. I didn’t especially want to encourage it but had to marry that protective desire with the wider picture – how could he fit in at school if he wasn’t armed with the lexicon of the playground? How could he join in games with big boys (and almost everyone in his school is a big boy compared to him with his summer birthday) if he didn’t understand the mechanics of a shape shift enabling alien watch like Ben’s? These are difficult questions, and ring true with my history – one of the reasons my parents bought their first television, if family lore is to be believed, was because I didn’t understand what Fame was and my teacher thought I was fibbing.

Before it became a true fetish object we decided to relent. What would he make of it if we let him watch it for a treat, this Most Wanted cartoon about an alien boy? He thought it was okay. He’s only asked for it once again, and that was because he knows how to spell it, speak the title as code as if his little brother might be interested. ‘Perhaps tomorrow we can watch B-E-N-ONE-O?’ he shouts conspiratorially at bath time. ‘Newborn’s not allowed because he isn’t nearly five!’

Which underscores something about Newborn too – whatever rules we have for his brother, what ever gentle nudges we give him to watch TV which is good and fun and offers him a side of lasting knowledge and discernment with his entertainment, Newborn will always have seen more. He never gets to watch stuff which is purely age appropriate for him, he must filter for himself and fall back into his place in the wolfpack hierarchy of boy. No safe CBeebies island for him in his introduction to the popular arts, no haven of Iggle Piggle and quieter fare. He’s seen the Tombliboo’s once, on a day when I had him alone and put it on. He now takes a tie in book, discarded years ago by his brother, to bed saying proudly ‘LOOK… lolliloo’ to himself and laughing in genuine wonder. They are his special secret, I think he’s still wondering if any other baby ever saw one.

Then today he saw an episode of Spot. Such simple, old school little kid TV that I remember my younger sister watching it. He ran to the TV, towards the simple line drawings and gentle, gentle voices, and had what I think was an epiphany: someone, somewhere is making TV for him. He held the screen, nose on the lights. And then he ran away. Perhaps it was too overwhelming, to feel so personally addressed by the magic box corner. After all he must associate it primarily with being told to move out of the way of the picture or being admonished for switching it off. Or perhaps he was just disappointed with the simplicity of Spot, and craves the episode of Horrible Histories where George IV explains his life long passion for actresses, duchesses and pies. I know I did.

If you are interested in Kids and TV my husband writes a blog on this subject.