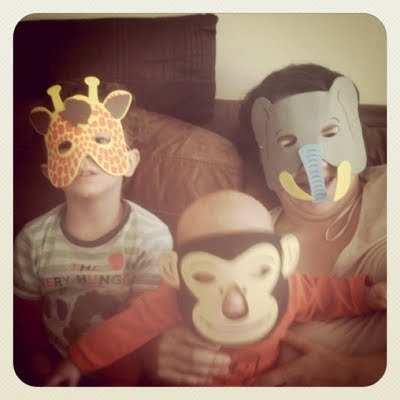 Parenting is a lot about storytelling. Already there are family stories kicking around our house. They are a messy, good-natured, gleeful mix of ours and other people’s; assorted anecdote scraps ready to be sewn into one brilliant mismatched quilt of funny things toddlers/grandmas/parents/teachers et al have said and done. The beauty of babies, the naivete of parents, the wisdom of the tiny.

Spider-boy, like many children, is only interested in the stories that take place after his birth, seeing anything previous as insignificant sound and fury. He looked at me incredulous this weekend when I pointed out a road we used to live on before he was born. His look said: ‘Firstly, you’ve told me that before, and secondly? Like I give a shit’.

He’s curious about some ‘pre-‘ aspects though, as his disdain for the past is confounded by a suspicion on his part that he has always been present. My little Forest Gump, he sees the world so clearly through the prism of him that he finds it hard to believe he wasn’t witness to all key moments in history. Mainly he wants to know where he was when I was in Grandma’s tummy and his father was in Nanny’s. Metaphors about glints in our eyes don’t cut the mustard (partly as I think he can only guess ‘glint’ means something like ‘splinter’ and gets worried about our sight). I try a new tack this week on the way back from nursery. ‘You were in two seeds’, I say, ‘Daddy had one bit of you and I had the other and we looked after them very carefully.’

I feel a faker but the strangeness of this information mercifully shuts him up, and in any case he’s distracted by the man behind us on the pavement whose openly guffawing at my parental idiocy.
Luckily Spider-boy can now create his own narratives to explain history and anomalies – from why elephant has a trunk to how his brother has been naughty to him all day. He talks about his work and fake reads his bedtime stories. He has a book of facts about nocturnal animals and now mimics me and his father as he reveals his own set of crazy revelations. He’s all ghoulish fascination with the violence of nature and flattering imitation of our voices when he spices up the page about leopards.

‘Did you know leopards eat small animals?’ he says. ‘They eat porcupines too’ he remembers, prompted by the picture. He pauses to think. ‘Sometimes though’ he adds, nodding to assuage any doubts, ‘leopards eat other leopards, tigers and sharks and also… buses!’ He holds the book tight and dares us to contradict him.

But he’s mostly interested in endless nursery tale re-runs, from Grimm to CBeebies via Uncle Walt. I love these ‘again again’ days as he tries to ensnare us all in a world of giants and witches and wolf stews and lost boys and magic beans. On Sunday at a barbecue we replayed Jack & The Beanstalk, The Three Little Pigs, The Three Billy Goats Gruff, Hansel & Gretel, Tarzan and The Jungle Story (sic).
There are variations on the theme depending on access to dramatis personae but key lines must not be omitted. Jack’s Mum must state he’ll ‘surely break his neck’ as he climbs the beanstalk, the piggies’ chins must be hairy, the wolf stew must have carrots and God help us all of we forget Mowgli’s songs.
Despite his verbal bravura though Spider-boy keeps his options open and covers his back, just in case these aged fables hold any immediate truth. He must be Gretel, for example. Not for any gender bending reason which would appeal to the wannabe literary critic of my youth, but because ‘the witch wants to eat Hansel’. Similarly he prefers to be any bit part over Jack, magic beans having more allure than ground down bones apparently. This said his poor brother, and mother, are usually relegated to the worst part of all.
No-one sane wants to be Station Officer Steel, or the second monkey on the left behind King Louis. And pity the fool who takes up a gleefully proffered part in Tinga Tinga – they almost always entails being Just-So-ed in graphic fashion. But despite the dangers I take any part I’m given as I love watching his imagination centre stage.
Today we play the Three Billy Goats Gruff. Spider-boy, unusually, is the troll. There is much game negotiation over who has more meat on them. We end the game with Spider-boy splashing in the sofa river and Daddy Goat victorious. But only for a short while. ‘There’s another goat, a Mummy goat coming’ says the troll in an alluring and conspiratorial whisper. I step up to the part I’m born to play, though suspicious after a Mummy-goring moment only last week. ‘What happens next?’ I ask, after saying I want some munchy grass. ‘The troll eats you all up’ he confirms and piles in for a feast.
Though I’m usually being put in my place, I think I like it best of all when he takes the role of soothsayer and storyteller. I like how he mimics my own use of stories from the past to explain the present and his uncomplicated confidence in the benefits of teaching those around him their lessons. He might not know what all the words mean (since Christmas he’s adored Jack & The Beanstalk, but last week casually asked me what ‘grind your bones’ meant) but at this point in time vocabulary is no limit for him. He can spin a tale and ensure we grasp the fundamentals hiding in the fabulous whether he understands all the words or not.