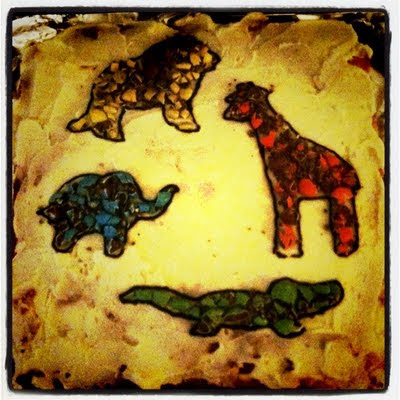 Spider-boy has just turned four. FOUR. Well done him – eating all that time, straddling two decades already, forging ahead and becoming him and him and then him again. Squeezing off see-through skins like a never ending edemame bean, perfect moulds of him shedded day by day to reveal brighter, firmer, more solid seed kernels of himself. My baby, my tiny thing, doing the big boy Birthday walk full of swagger and excitement. Bright, hilarious, wondersomely greatastic, and, as ever, showing me who’s boss.

Get this: He’s so great I try not to get my knickers too knotty about him too often. I hope I’m not unnecessarily needy or worrisome about milestones. I worry a bit, of course, but not loads. Usually, after a few evenings of panic, I manage to find my inner cajoling voice which reminds me important things like:

Failing that I call my Mum and let her remind me of these things instead.
My latest fear was magnified by his shift to school aged lad, and boy was it a corker. It crept and edged along the shadows by the skirting board, like a rogue North London mouse, grey tail flickering in the corner of my eyes. I wasn’t even sure about the worry at first, it was the sort of worry I couldn’t quite remember when I tried to think about it. Then it began to dawn on me. Spider-boy doesn’t draw. Lovely though his few paintings are, not much has changed in the last year.
Now, I know I posted about my love affair with chalk and dusty scrawls, but I’m quite paranoid about my artistic and creative lacking and my inability to draw very nicely very often seems to sum that up in my head. I see mums around in homemade dresses, kids with handknits, look online at amazing feats by arty parents who create and create, whose houses and clothes and kid’s stuff is so beautiful and unique.
I try, of course. For my Birthday my ever encouraging and stoically kind and good husband bought me a painting set and a book by Quentin Blake so I can start again with scribbling. But I can’t shake the feeling I lack the nutty lump of talent deep down to do more than imitate and frustrate myself. I sometimes reckon I hit my stride with baking and decorating cakes, I enjoy my rustic efforts even if the results are a scrappy not a suave sugar rush.
Give me some buttons, I can at least make a hash of a hedgehog on a Victoria sponge, but a pencil? Nope. I’m back to being shit in the art room at school. And this sort of insecurity bleeds out, worse than my poorly applied watercolour washes, infecting my sense of the mother I could be and whether I can offer a creative enough backdrop for my lads to find and feel comfortable with the own creativity.
I’d like Spider-boy to at least enjoy drawing now, while he’s a kid, and later who knows, at worst not feel wibbly about what he can do. I’d like him to have a non-complex relationship with his creative side, and let youthful experiment and fun form a template for how he wants to attack life’s blank pages, rather than a weight stopping him from daring to pick up the pencil.
But he won’t draw. He says it is ‘boring’, casually dismisses painting and tracing and colouring as what he will do at school. The art shelf in the playroom cupboard sits well stocked but sniffed at. The ‘thank you’ and Birthday cards we make together are no-go for chit chat, at best he’ll slam about with stickers or stamps and finish off fast.
I know, know, know as parents we shouldn’t compare, but we started gazing around. Facebook pages, walls and fridges – his peers really were drawing amazing things. People and flowers and animals. Figures, legs, faces, long spidery fingers. Stuff which had started to look like, well, stuff. After a conflab we dared ourselves. And we looked up figurative drawing in the little red book. On the milestones page. He was running out of time to be a ‘normal’.
We tried more championing of his pictures but he smelled the agenda. He humoured me by offering to do magic painting, pictures appearing after aggressive bursts and slaps with water on an old brush. Then he stopped looking at the paper. If he was holding a pen, crushed nibs down to snubs, tore the background.
We decide to leave it and speak to his key worker after the Birthday festivities died down. I shh-ed my neurotic neurons which were boggling over whether he was over-pressured, needed glasses, had been deprived of art on the walls at home, needed more or less input from me.
I was working on his Birthday but nursery had a small tea and made paper hats. Nothing grand, but I made a cake for him to take in a satisfyingly Nigella-ish moment of managing home and work life. At his request it was a square cake with apples in it and jungle animals which I made by smashing Smarties (you can see them in their cracked up glory above).
And Spider-boy had a lovely day. My husband said he skipped home for our family tea date with his best friend. He said the nursery cake wasn’t appley enough, but next time he hoped I’d do better, and couldn’t deny the crispy, chocolate animals were good enough for me to make more on his cake that night. He burst into the kitchen to check up on my butter icing and at the offer of a spoon we fell in love with each other again in naughty licks. I dropped my worries to the floor and decided to leave them there along with his nursery card, crown, and bag. Which contained this (the nursery bag, that is): 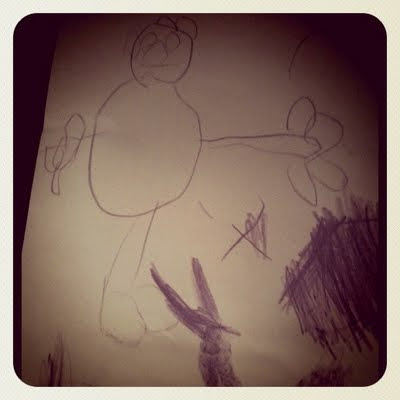